Tam and I went to the Tri-State Gun Show today, out at Stout Field National Guard Armory.  These are always nice, medium-sized shows that punch well above their weight in terms of the items one encounters.  (It's there Sunday, too!)  I saw an H&R "Silver Sportsman" 999 in nickel-chrome, priced for about what it was worth, mid/upper three-figures, a bit out of my reach.

However, I also saw this H&R: 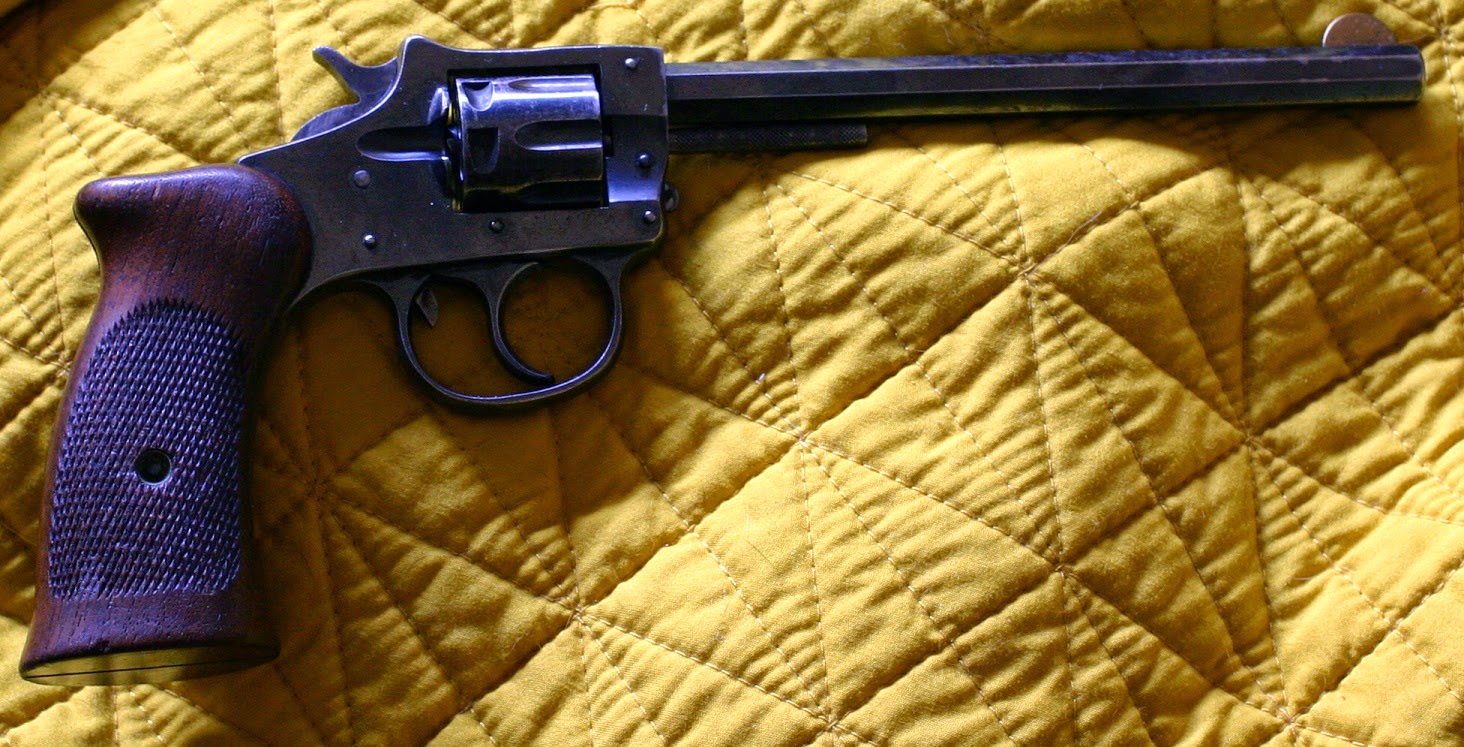 Had to take it home, of course.

There on the top strap, it actually says "TRAPPER MODEL," and this long-barrelled, large-grip .22 was intended for .22 Short, used to deliver a merciful coup de gras (sic) to animals caught in traps.  These days, I'd use Colibri or CB/BB caps for plinking at the range.  No crane; it's a "pull-pin" type revolver with a press-to-release latch under the pin at the front of the frame.

Mind you, that's if Tam's cat ever lets me shoot it!  She laid a claiming paw in it as soon as I set it down in her patch of sunlight for photographs.

A good show; I picked up a workbench mat and a 9-shot .22 speedloader (H&R) as well.  Tam...  She bought other things.  She might even tell you what they were, if you ask nice.

(Also, my first gun show wearing contacts instead of eyeglasses in some years. It's somehow different.)
Posted by Roberta X at 5:24 PM

Can I put in an order to Rannie for a nice pre Series 80 Colt Commander?

An excellent find! Glad you had fun.

Rannie looks like she may be related to our Bright Huntress. (RIP)

Oh, Robin, I can give you the part number for the shim to remove the Series 80 stuff for a Commander.

Nifty! I have an early 999 those speedloaders take some work to get the cartridges in the chambers

Yes contacts sometimes take a little getting used to.
For me, it was having peripheral vision in focus for the first time in my life.

Amazing how many niche gun designs popped up in the 20thC. Go Marketing!

Second thought: a mini-me version for a Dirty Harry movie.

"I know what you're thinking. 'Did she fire seven shots or only six?' Well, to be frank, in all this excitement I kind of lost track myself. But being as this is an H&R Trapper's Model, one of the least powerful handguns in the world, and would hurt a lot, you've got to ask yourself one question: 'Do I feel particularly fortunate?' Well, do ya, rat?"

This pistol is not so much intended to administer to administer a coup-de-grace as it is to prevent the pelt from being damaged. Any holes in the pelt lower its value so blowing the animal's head off with a center-fire costs the trapper money.

The optimum shot to dispatch a trapped animal is a shot through the eye into the brain that does not leave an exit wound on the other side of the skull. For this task the 22short has just the right amount of energy for small animals such as fox, muskrat, mink, martin, raccoon etc.