You'd think anything this spectacular would make a sound-- 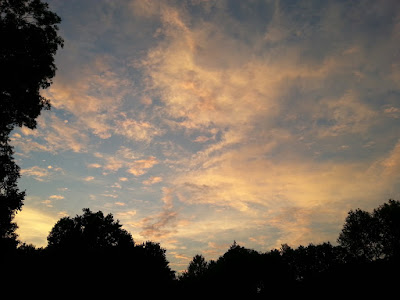 It crept up quiet as ever. 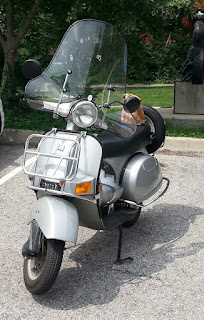 Some things do make a sound: I got my motorscooter running day before yesterday; once I filled up the gas, it started almost immediately, which is very pleasant considering it'd been stored since late last Fall.  I always add the storage treatment to the the gas at the end of the year but the tank was almost empty.  I was worried there was going to be a great deal to do.  I still have to clean the air filter and change the oil.  It's starting to be time to think about new tires, too.  And I'm going to have to scrub down the cargo racks with something very mild and then wax them: the Indian chrome-plating has thin spots and the thin spots are just beginning to show a haze of red.

But, once started and running smoothly, the first thing to do was take a few loops around the block and then and a nice long check ride yesterday.  I burbled up back street to to the Indianapolis Art Center (where the Indiana Writer's Center hangs their mills) and return...

...With a stop at the incomparable Rene's Bakery along the way!
What's in the case?  Deliciousness! 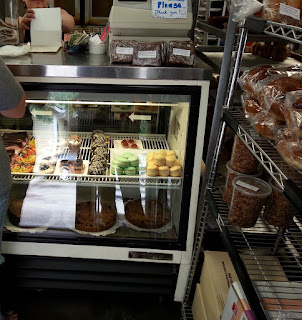 I brought back an almond croissant and some banana-walnut bread.  I bought a chocolate brownie, too, but I devoured it while reading at the Art Center's park.
Posted by Roberta X at 7:44 AM

Email ThisBlogThis!Share to TwitterShare to FacebookShare to Pinterest
Labels: Food, it's Art okay?, marvels of nature, two wheels and noise

A victorious check ride! I like everything about it.

All part of a complete function check!

0000 Steel wool and light oil should take that rust right off cleanly.

Have the racks re-chromed. In the late fall of course...

If possible, I prefer to empty the fuel system of something I know is going to be stored over Winter. Get all the gas out, then run the engine until it quits from fuel starvation.

Alternatively, your procedure of adding a fuel stabilizer like Sta-Bil or SeaFoam works well, but it's usually recommended that you have the tank near-full to minimize condensation.

Of course, one cannot argue with success! It's always gratifying to bring an engine to life after a long storage.

Please do be careful while riding!

That's good news, one less thing to have major issues with!

And oooh, I need to check out that bakery.