I had to go solo this year, while Tam stayed home to meet the AT&T tech.  This meant, of course, that I lacked even the modicum of restraint she sometimes adds-- 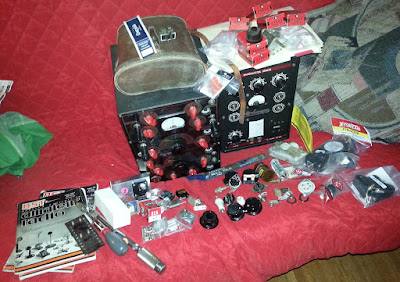 The two large devices are a 1940s Meissner Analyst, which is a kind of "test bench in a box" for receiver servicing, and a 1950s Harvey-Wells Bandmaster, a 25 to 30 Watt AM/CW amateur radio transmitter.  Both appear to be pretty clean; the transmitter needs an external power supply, 400 V at 200 mA.

Other neat stuff: a pair of vintage binoculars in good shape -- didn't have anything but toy versions, so for $35, why not? -- a very good push drill with (hard-to-find) straight bits and a "Handyman" Yankee screwdriver' a full set of Birnbach ceramic antenna insulators, chassis-mount octal plugs (good for power supply connections), three General Radio mixer knobs, a couple of Dakaware knobs, a National tube socket and 100 pF variable cap, another 100 pF dual variable capacitor, an SW-3 coil form, a 6F7 tube (possibly for a project) and a pair of 6L7s (used in my microphone mixer).  Plus four 1940s/50s QST magazines, three quartz crystals and and assortment of other nice small parts.  Not shown, a short (10'?) desktop rack and a large toroid core to wind a balun on (you want 'em big -- magnetic saturation is lossy and can produce a lot of heat!).

I met my dear old friend Don H., and several other people I know slightly, including the talented Jim Borgioli,whose ham work includes building very nice AM transmitters that run at or near the legal power limit. And one ham who knew me!  A young man who'd gone looking for info on the Stancor 10-P transmitter and found my postings about it on Retrotechnologist walked up to in the flea market area, asked, "Are you Roberta?" and introduced himself.

Found but missed a nice balanced antenna tuner.  I should have purchased it at first sight!  But it's a cloneable design and I think I have the parts.

A fun time!  When I returned home, the phone tech was there -- and pointed out a very large broken limb on the roof and my ham antenna and still loosely attached to the tree.  I climbed up and had a look, but it's too big and too precarious for me.  We've called the singing tree hippie, who does great work at a fair price.
Posted by Roberta X at 9:20 AM

How very refreshing to see you operating in the full-blown geek-out mode.

I never realized your were a ham nerd too. I am a gun guy, but I have a ham op since I was 12. I just come here to peruse your thoughts on guns and 2nd amendment issues. small world. ka8krv here. thanks for your efforts on this blog and I will have to check out your others.

Tube amp semi nerd, of the guitar playing fraternity here.
Always pondered putting a bit of effort into designing a circuit around some of the lesser known and used NOS tubes floating around.
It would be a fun idea, but, the standards are standard for a reason, and the new production Tung Sols/JJ's/ et al work well enough for my musical level.

Pigpen51, I have been a ham off and on since I was 15 and a radio geek since age 12. Much of my interest is in older gear, though I have (and use) a couple of Ten-Tech 540s and their Scout 555 with all the modules. All CW so far; I've got a little AM rig on the workbench now and some bigger ones in the queue after it.

Joe: Modern multi-match output transformers would simplify building the power stage around something a bit odd -- 6BG6, perhaps? -- and subbing 6L6s later if desired. I've long believed the overload characteristics of 6L6s and KT88s were responsible for much of the warmth in electric guitar sounds. Jensen Transformers have some interesting preamp circuits on their website -- cascodes, etc. -- that are worth looking into if you'd like to chart a different course on the input/driver side.

And for both Joe and Pigpen51: I've long harbored a secret wish to build a 1920s-style ham transmitter around one of the (repro!) WECo 300B audio triodes that are so highly spoken of by audiophiles. It's probably the last of the classic power triodes still in production.

Roberta,
I once built a 25 watt x tal controlled cw transmitter based around a 6l6 tube. if I recall, I used a600 watt, center tapped transformer, and plug in coils, with plug in x tals. I also built several heathkits transceivers, back in the late 70s. now, mostly do 2 meter fm. thanks for the shout out.