So we went to the 'con -- wandered into the huckster room five minutes early and got chased right back out, despite my reflexive mutter of, "...Press...."

Withal, early arrival is still early five minutes later -- and not in the vanguard. 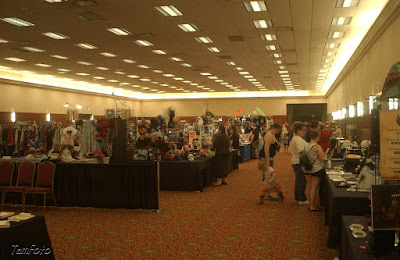 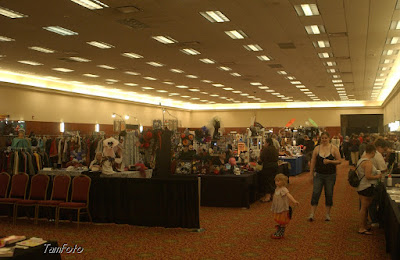 The two photos are a sort of a blink test, and I doubt my phone camera runs fast enough to have got the second shot; that child was a blur -- a polite and pleasant blur -- in real life. 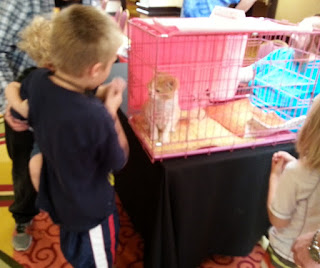 Meanwhile, up at the registration desk, a very nice old cat, Sir William, was both summerized and summarized: Sir William, 13 years old, brought to the shelter when his owner moved in with her boyfriend.  He made eye contact with me and had much to say while enjoying the attentions of small children. 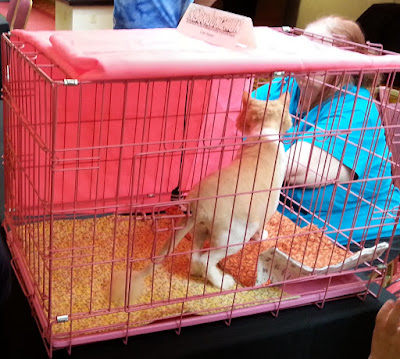 The "lion cut" suits him, I think.  That puffball tail!

There was a remarkably well-stocked bookseller (all new) at the back of the hall, and Indy's own The Starship Cat, with T-shirts and a wide array of used books (and et very c, from japonaiserie to all-composite tactikewt knives just like the CIA doesn't use) about half-way down.  (If you hunt obscure SF titles on Amazon and buy used, you may have bought from them).  The new-books guy had pre-release copies of Charles Stross's latest "Laundry Files" book, The Annihilation Score, which I could not pass up.  It appears that Baen has reissued the A. Bertram Chandler "John Grimes" novels in a set of fat paperbacks, too, which is at the top of my list; I picked the originals up catch-as-can and missed a few.*  The other item I had to buy on the spot was a collection of Terry Pratchett's short fiction -- there's another of his non-fiction I may purchase yet.

Did not see Musical GoH Marian Call, but she had a table set up in the huckster's room with an Hermes portable typewriter at the center -- Instant poetry?  Lyrics on demand?  I dunno but trust a musician  to have chosen an excellent instrument.

The pleasant and prolific Tim Zahn was set up right inside the door; he was a bit busy stringing up signs and making nice with fans.

Didn't attend any fora; there were a couple of some interest to me but neither Tam nor I had eaten more than toast and coffee all day and my back/shoulder were starting to trouble me.  Headed home by way of Indy Tacos, which turns out to be straight-up good Mexican-ish fast food, tacos with a nice variety of fillings, burritos and the like, in a clean, no-frills setting.  They get rave reviews -- and with good reason.

I do get stressed in social situations, especially in places and around people with which and with whom I am not familiar: I was in bed by seven and slept for thirteen and a half hours.
________________________________________
* The series started out emulating C. S. Forester's "Horatio Hornblower" books but became very much his own thing.  Chandler was better-qualified to describe life aboard a starship than many SF writers: he was a merchant marine captain, mostly on Australian vessels.
Posted by Roberta X at 10:25 AM

Email ThisBlogThis!Share to TwitterShare to FacebookShare to Pinterest
Labels: books, marvels of marvelousness, the wonderfulness of life

Did you go back today, or was it a one day thing for you?
We gaffiated years ago, have debated going back but have never really been motivated. I'd like to say fen would be understanding and supportive, but have to admit that Things have Changed. The rice of becoming mainstream, I guess.

I hope you heal up. Sleep is a wonderful drug. If only it could be done faster.

Personally, I am rarely afflicted with InConJunction a fact I attribute to ample dietary fiber, copious consumption of liquids and regular movement (in all senses of the word). It also helps that I can vent my bile on the blog-o-sphere.

D.W., "fen-speak" is one of the things that keeps me away.

I read Chandler's Space Mercenaries in my youth; I'd like to read the other Empress Irene novels, and now the Grimes books. Looking back, there was a touch of Firefly in Chandler's writing about the captain (and husband of the "former" Empress Irene) keeping the crew of the Wanderer all happy and pointed in the same directions.

If anyone here reads in e-format, Baen has all of the Grimes omnibuses that they put out in paper also available for your eReader of choice. I scoop up their WebScriptions bundles every month. I'm falling sadly behind in reading them, though, what with all the excellent blogs available to read. ;)