Another Stop On The Tour

Looking Southwest: Power plant, baseball field, hotels shaped like headboards (I'm hoping the big, blue-glass curved one doesn't melt the ones East of it some sunrise!), another one shaped like an M with a tail, various parks, a bridge kept just for pretty, zoo, gardens, museum, river, canal and -- of course -- the "Speer" building behind the Statehouse. They had a hard time finding the light switches in that complex -- seems the architect never dreamed they'd want to save a few bucks by shuttin' 'em off when the bureaucrats and their hard-workin' support staff* went home. Also a nice shot of the railing -- I'm actually behind it, at the far end of the South alcove. 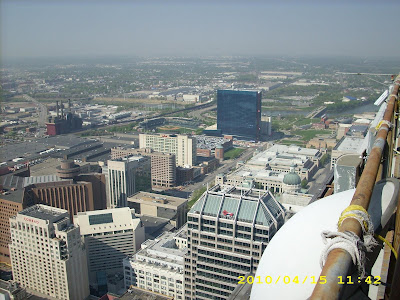 And here's due West, with a better look at bits of canal, zoo and -- at the the right foreground -- Mysterious Siege Engines atop the AUL tower. (I have no idea; I have been to the tops of several tall buildings but never that one: it's all two-way radio up there and last I knew, all one brand, too). 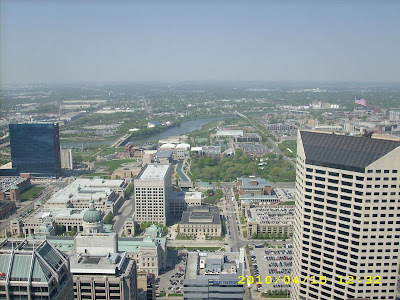 One last item: Does anyone know how a Roman villa -- vide: 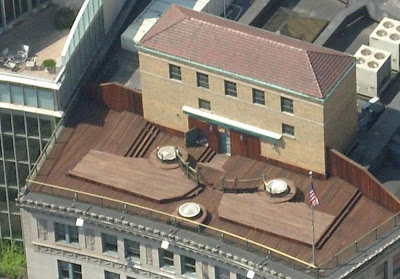 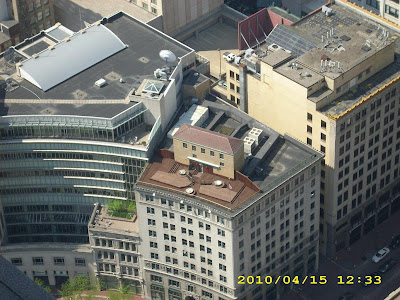 You'd have to be pretty acrobatic to go ask the next-door neighbors for a cup of sugar.
______________________
* And I say that without sarcasm; I have found State workers here to be, on average, helpful and solution-oriented. Yeah, hardly true to the stereotype, but whatcha gonna do? Helps that I ask fun questions, like, "How do I plate the MGB I've kept garaged for the last decade?" or, "Suppose I'd forgotten to pay income tax for a few years?"
Posted by Roberta X at 5:25 AM

shaped like an M with a tail, No doubt designed by a Notre Dame alumnus with fond memories of Michigan's 18 years drinking age, when Indiana's was 21...
two-way radio up there and last I knew, all one brand, too /\/\?

The rooftop Roman villa is a hoot. How much juice does it take to have something like that designed and built?

I have a SIL who worked in the building. Evidently there are PIR type occupancy sensors where the switches should be. The lights would go out if you didn't get up and walk around your office every 20 minutes or so. Kept her from napping at her desk.

If that had an awning and something to serve as a wind break, it would be the Best. Porch. In. Indy.

And I know porches.

I'm just trying to figure out where the rainwater goes. Looks like everything they'd need a watertight front door if the drain system plugged up.

In that first picture, you can see the revolving restaurant on the roof of my old hotel!

Yeah, the Iggle's Nest does in fact still move - it's kind of trippy if you're up there and have a couple of drinks while it's moving.