The first thing you see is...Me! And some tower guys, who are looking towards the sounds of a police chase. The roof of the City-County Building is just visible at lower left. 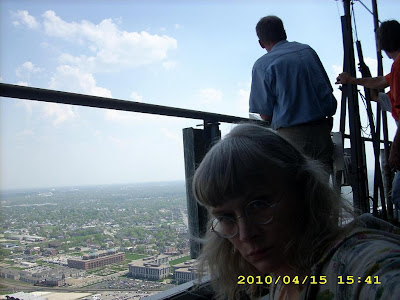 Most of these photos were snapped after I'd wired up a connector and while the guys were attaching and weatherproofing it, or much later in the day, when three of us were working in a space where 1.5 techs fit. This one, I cheated: before I started soldering, I grabbed the camera, held it out and *click!* I should smile more.

A nice vista from this side: 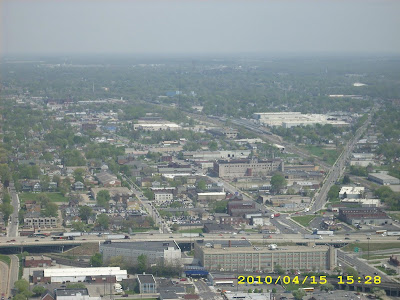 Near the center, a pair (or did they take one down?) of radio towers lead the eye down to a one-story building in a city park: it's Police Radio, the 1930s transmitter building for IPD. Still there and still in use. Delco ran ads in the amateur radio mags in the '30s, showing a row of radio-equipped squad cars (all with Delco heavy-duty generators!) parked out front. I'm told the radio workshop there was quite a place, as a lot of the equipment was built in-house.

A bit more of the view: 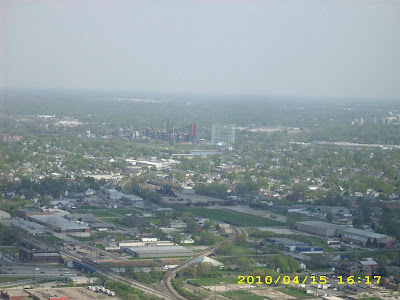 Interesting big gasolier/gasometer at the center, no? The stuff that stretches off to the left seems to be associated:

Google Maps shows big piles of coal -- I'm wondering if it's a coal-gasification plant. Seems odd, I thought we had natural gas around here (I know there's gas and some oil farther North). Then again, Indana's got coal, too, a lot of it a bit challenging for modern scrubbers. Do any of my readers/fellow bloggers know? (Old Grouch?)

Update: It's a (former) coal-gas (or "town gas") plant, which also made coke, and it had become a huge cash-sink for Citizen's Gas. See Comments for many interesting links!
Posted by Roberta X at 6:44 AM

Email ThisBlogThis!Share to TwitterShare to FacebookShare to Pinterest
Labels: marvels of nature, marvels of science, things that should not go bang

Yes, you should smile more.

It's actually very pretty when you do.

and the pictures were GREAT.

Smile? At that altitude? You smile and it upsets the falcons.

Bobbi, where was your parachute?

What you do, is actually beyond cool.

Can you say acrophobia? I knew you could! ;-)

Brrr. Glad you enjoy yourself in your job. I fear it would be highly unlikely for me. The safety departments we operate under often require us to wear a harness just climbing a ladder. Nothing to tie to, but gotta have the harness on.

I was considering taking a rope access course. I start to think that is a bad idea.

It's the (now closed) coke (as in fuel) + gas plant. (Citizens Energy used to be "Citizens Gas and Coke Utility.") The plant converted Indiana coal to coke (which was sold mostly to steel plants) by passing steam over it. Actually the coke was a biproduct of the gas manufacturing process, as the resulting CO + H2 (water gas) was fed into the local distribution lines. (The system also used natural gas, and the manufactured gas was phased out in 1998.)

The site once had a conical tower in which the hot coal was exposed to steam. This produced some spectacular vapor clouds (see photo) in cold weather. There was also a second gasometer, to the west of the existing one.

Needless to say, the plant's turn-of-the-century design didn't give a lot of thought to pollution, and from the 60s on there was continual agitation and protest over foul smells and particulate emissions. But what ultimately killed the operation was a drop in demand for coke, mirroring declining domestic steel production. The plant is scheduled for demolition next year.

Could be some interesting industrial archaeology there; I hope somebody is documenting it.

Coke and a smile?

"Could be some interesting industrial archaeology there"

I was pretty sure you'd know, Old Grouch. Pity it's closed. --Have to wonder what the Urban Exploration set has done there....

As for acrophobia, the ambiance of that building-top is very basement-like, until you go out on the alcoves. Those are (mostly) surrounded on five sides; you have to step up to the railing and lean out to really get a visceral feeling of height. Well, I do, anyway. It's not gonna reach out and grab ya.

You'll never get me up there!

It's not the height, it's the swayin' back and forth.

It almost looks like an "Elephant Cage" ELINT antenna array.

I wouldn't be smiling that high up without a parachute, either.