Conversations In A Starship 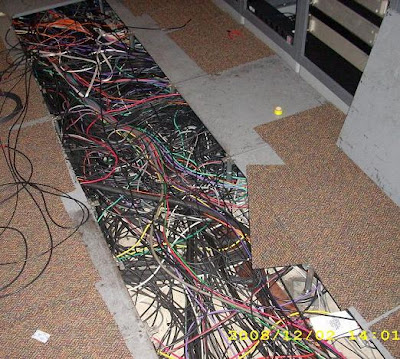 So, awhile ago coverage of the Macy's Thanksgiving Day Parade arrived via the shiny new ansible and they played it on comms monitors all over the starship. During a break in the wire-removing/rerouting festivities, I remarked that the parade "...looked like a toothless version of my friend Tam's dream of a twenty-foot flying predator to keep earthbound humanity from getting too complacent."
Conan The Objectivist: "They otta see what we have to deal with! So, you mean something that looks at humans the way owls look at mice?"
Me: "Yeah. Probably swiveling their heads all the way around, too."
Onlooker: "It is just freaky, the way owls do that."
C the O (sarcastically) "Owls are possessed by demons!"
Me: "I am totally not messin' with any demon that possesses a pet owl. No way."
Onlooker: "...er...?"
Happy times, happy times.
Posted by Roberta X at 11:05 PM

Email ThisBlogThis!Share to TwitterShare to FacebookShare to Pinterest
Labels: eyebleeds, Geekery, I work on a starship, to not be a fly on that wall

a) The conversation... To a small critter, and owl IS a demon. Gliding in on silent wing out of the dark sky, tearing claws, the beak from hell, and a self satisfied smirky 'hoot' of enjoyment over it all.

I kinda identify with the owl....

b) The wiring... Clearly there is a serious lack of flogging at the starship. Our own jeffries tubes are much better ordered, and almost look like the work of mortal man. In our case, mortal woman. An elf named Linda who quietly disappears up a ladder into the belly of the dragon, only to crawl out a hour later dragging a screaming server by it's private parts, all the while our network never misses a beat.

a) I admit it, I kind of favor the owl, too. Owls, of course, do not care, having their own owlish business with the world. A lifetime ago, my father's nighttime antagonist for several months was a tiny screech owl, who had decided the patio was a perfect spot to practice, yes, screeching. Nightly. For an hour or so at a time. Dad never did shoot the little bird but he was sorely tempted: the critter could not be made to leave until it was good and ready to.

b) You'll be stunned to hear, then, that you're seeing a greatly-improved example: that is the place where, until recently, the deck plates had to be held down with extra-long screws or stood on by a heavy person in order to fasten them back down.

Mweh. Come by my current project and give me a hand. We have a half mile of machinery, and the current draw is 6750 full load amps at 200 volt, three phase. (20 assorted machines)

And they ran the signal wires in the same conduit as the power leads. In 4" conduit. Encased in 54 yards of concrete. I wake up at night wondering how I'm going to make this work.

Owls, by the way, are way cool- but they scare the beejus out of my dog.

And I get to fix this.

(a) A few years back, the lady next door got a morning surprise when she glanced out her kitchen window and saw this pair of EYES looking back at her. 'Twas a Barred Owl- one of those big (20" tall) suckers who goes "hoo-hoo-to-hoo" - sitting on a tree limb not 10' away.

Shortly after that they chopped down the tree and put in a deck...

Owls are fun. Their brains are almost entirely exquisitely tuned and evolved sensory hardware- hearing, sight, the sort of automatic acts of differential calculus required for optimum swooping- leaving relatively little room and energy left for much cognitive capacity. They are, basically, biological advanced strike fighters piloted by the IQ equivalent of a brain-damaged beagle.

I knew an ornithology grad student who used a captive Great Horned to distract the kites she was studying so she could get a good look at their nest. Since the animal's response to anything novel was invariably to panic and fall off of something, the owl never failed to "cooperate".

Screech owl! That was the mysterious bird call I heard last summer on the Monon!