On A Starship, Success Is Its Own Punishment

Bet it's that way where you work, too.

Strolled into the Engineering Shop at something near the usual time, for a wonder. Said, "Howdy," to the First Watch gang -- Jonny Zed and C. Jay -- and the "earlybirds" on Second Watch, who come in three hours early to maintain continuity (all the "mission-critical" positions are covered that way, a tricky juggling act for the Chief to schedule but he's always got at least one fresh techie in Maintenance and Operators in Drive Control and the Power Room who aren't completely focused on dinner and a warm bunk. At least that's the theory). As soon as I could grab a phone, I called up Stores & Cargo to check on my order: "RX? Yeah, we'll have your tube and...cavity? We'll have 'em at Engineering by this time tomorrow."

I thanked them and hung up, as the Chief emerges from his Inner Sanctum (a private office about the size of a shoebox. But it's got a hatch an' everything, which is nothin' to sneeze at), fixes me with the beady eye and asks after the squirt-booster drive that got added to my task list the other day.
"I've found the problem but ran outta hours before I could fix it last night, chasing the bad ion engine. --Parts for that 'll be here tomorrow."
"Fine. Go fix that drive, then. Today."
Ooops. A good day for the soft answer that turneth away wrath, I do believe; made same and a hasty, quiet exit.

* * *
There is this about the maintenance bay for squirt-boosters: There's no one to bug you. Or lend a hand, but there are plenty of tools and supplies. It's a bad day when these critters don't work. Not a fatal one, usually -- minimum complement for any trip up or down is two and, yes, one alone will do the job. We're not paranoid, it's just that we don't get paid if the freight goes splat. Downside, there's precious little concession made for maintenance access.

A squirt-booster is a cubist's version of a lemon wedge, twenty feet long, eight and a half feet high and four feet wide. There's a very simplified stardrive engine in it along with some very basic reaction-drive for fine maneuvering and it seats six -- or four big guys, or eight people who really, really want to get from Point A to Point B. Especially if they like roller coasters.

How does it work? It very nearly doesn't. You strap 'em to a collection of standard freight containers (ours are a little different, mostly a matter of mods to the basic 8 by 8.5 by 20-foot box) and for planet-to-orbit, blip the drive. That small a mass, that close to a planet, there's not much control, but you can hit orbit with a couple of quick zots and use the drive's vector-shifting tricks for gross maneuvering. --Very gross for the passengers, if any, since you go from rightside up to sideways to whatever; but it does the job. Trips down are nastier; a typical four-by-four drop is four containers, four squirt-boosters tucked in the corners, a wad of crash balloons, some ribbon parachutes and a big ol' ball of foamed ablative. Blip the drive to deorbit, fall and flame, flutter the 'chutes, then jink and jitter around with the drive to get over your landing zone; kill the remaining velocity with the reaction drive and bounce down on the crash balloons. Needless to say, the LZ is nothing more than a large, wide-open field. Very large. It's complex but cheap and modularly scalable. As far as I'm concerned, the pilots who run 'em are either gods or insane. Probably both.

The unit in question, however, has developed a nasty tendency to do nothing at all about half the time when it's supposed to go blip. There's always another unit backing it up, but it adds an unpredictable lurch to the motion; the system's automated but nothing's fast enough to do a complete correction when it fails over. This annoys the pilots, plus there's a small but non-zero chance of lurching into the ground it fit happens at the wrong time they don't like, either.

Yesterday I ran it down to intermittent RF from, yes, another verdammt drive modulator -- simple as a hammer and not itself the cause. RF signal leaves it fine, occasionally does not get to the power amplifier; there is one piece of coax about twelve feet long between them and all I had to do was check it. Every inch. Which I did last night and found a suspicious flat spot.

Today, once I get the suspect section free of the clamps and two layers of spiral-wrap, it's obvious there's more than a flat spot; there's a tiny rectangle punched in the cable, too! Right through to the inner conductor. Maybe a tool slipped when the thing was assembled, maybe someone got clumsy while fixing some other broken bit, but I'll have to cut the line, install a connector, and add a new piece in place of the bad one. Fussy work but straightforward. (Translation: I loathe the connectors and coax used for this application; you can count on ruining one and having to start over at least once, every time).

A mere three hours (and one dropped and lost forever SMA "barrel" coupling -- at least it fell out of the squirt-booster) later, it's working reliably in test mode; I untangle myself from the cramped innards, gather up tools and use the terminal to log it back in service before putting the cover plates back on. Yay, hooray, another problem solved. It had sure made for an interesting ride down a few days ago!

The neck you save may be your own. It does add a touch of personal interest to the work.

Which reminds me, I found part of one of the old RCA ion engines stuffed in a storage locker while fixing the booster. We haven't used them in years! 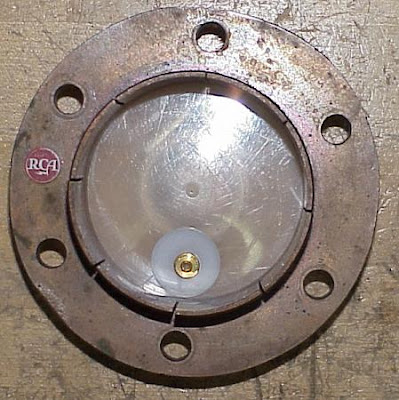 There's a plastic cover over the more-delicate bits, so it's a plain-looking item. Probably someone rebuilt it, years back and it has never been needed. It's definitely been in use -- see the typical erosion of the flange in the 8 o'clock area, which is next to the compensating electrode in a complete unit. The last octet of RCAs was replaced in '95, about ten years too late according to the old-timers.
Posted by Roberta X at 9:27 PM

I love how you make RF engineering sound more exciting than it really is.

It's all a matter of context -- most of these vignettes run pretty close to real life. I think this will be the last such for awhile, though. I've been using them to work out background for some more plot-driven writing.

I am so going to have to get an inter-species translator!!!!

More fun than a barrel of zombies.

Gotta say.... I enjoy reading these over morning coffee. Thank you!

I Just wanted to add that Gotreception.com (http://www.gotreception.com) is a great resource for finding out where reception problems are most likely to occur.

Roberta ... your little starship stories are some of my favourite reading. I do hope there are more of them in the offing ... although your reply to alan suggests otherwise. [sigh]

Gotta say, Lovin' the Starship action. Always anxious to hear what you are fixing aboard that thing.

Fear not, the posts will not stop. I was thinkin' the starshippery had become a bit too frequent.

I did get the RF power amp for the ion drive fixed, too -- hour and a half, which is a new record for a full change-out and retune. There's a new subcontractor rebuilding the cavities, Earthside, and oh are they goooood.