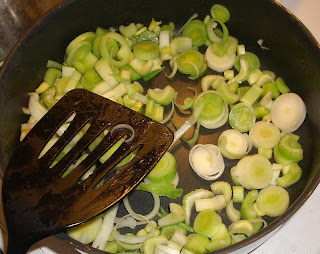 Update: a few images added!
I don't have time to post the photos or go into great detail, but Saturday after the Indy Hamfest, I was pretty hungry, so I made the slow version of my quick beef stew with lazy-girl roux: flour a pound or so of stew beef and brown it in bacon fat with a little pepper 'til it looks cooked, then deglaze with a little Chianti; add water to cover (toss in the bacon you fried for the fat) and cook uncovered until most of the alcohol aroma is gone, then 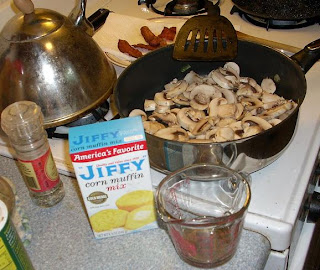 simmer an hour (at least!) before adding a potato or two, cut in middle-size chunks; then saute carrots and add, followed by celery and leeks, and then mushrooms. Gotta saute 'em for best results; it's worth the effort. Add a can of condensed beef consomme (trust me) and water to cover. Let the whole thing simmer for another hour and give it a taste. It'll probably need salt (and may need to have any excess fat skimmed, a simple process). The sort-of-a-roux makes the broth middling thick without lumpiness.

...Had that Saturday dinner, with corn muffins, and put the leftovers in the fridge. Tonight, I diced and sauteed a large, sweet Hungarian pepper plus one tiny, hot-hot-hot Serrano pepper from our garden, 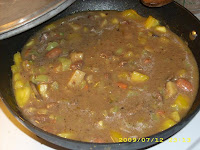 then sauteed (!) a large yellow tomato (just wanted to cook it down a bit), added the leftover stew and cooked it for a half hour. Nice! Letting it sit a day actually deepened the flavors.

It's not haute cuisine (one of my friends years ago claimed I was a natural short-order cook) but I like it.

Photos later, as time permits added.
Posted by Roberta X at 12:50 AM

Ever try cutting the top off a bell pepper and using that as the beef stew vessel to eat from? Then eat the pepper? No bowl to wash; just the saucer and spoon/fork.

And if you roast the pepper slightly, it'll add another dimension of flavor.

You say it's not haute cuisine, but few people will take the time to separately saute the makings of a stew. I think it's key to the flavor, and your's sounds delicious. Also, the browning the beef in bacon fat.... bravissimo!

Try putting the prepared stew in a hollowed out pumpkin and then bake at 350 for an hour or so. The flavors are wonderful.
Rey B.

Two spendid suggestions! Thanks, OrangeNeck and Rey -- I'll have to try those.

'Teach, since the beef's already simmering, it doesn't take any more time to saute the vegetables and it makes quite a difference. I only had to try it once before becoming a convert.

The muffins had chunks of bacon in them. They tasted like freedom.

There's a few shortcuts in there, but the overall mindset is very much in line with today's idea of haute, which is mostly rooted in cooking traditions that started in peasant kitchens.

Ya don't think people would have started cooking down beef bones for consomme and long-cooking tough cuts for stew with lots of filler vegetables if they'd had prime rib, do ya? ;)

Chris, it's all-round handy stuff -- and since most of it ends up either cooked into the roux or skimmed of, what's left is the flavor!

Labrat: H'mm, you do have a point there. I'm rarely happy with the presentation of my cooking...but the taste suits me!

Tam, the corn muffins also had a little fennel seed, 'cos....just 'cos. And don't forget the Irish butter!

Looks good, but it's a bummer you threw celery in there.

Ahh, but there's the beauty of the Intrewebz: when you make it for yourself, you can leave the celery out; while I, who likes
the stuff, can keep on puttin' it in. We both win!