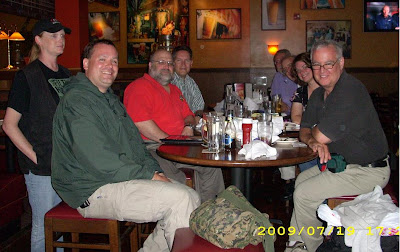 (My place is being held by the Big Camo Purse Of Tacticalness). Joanna brought cookies far above and beyond the usual sort: they were scrumptious!

Jerry won a scary bottle of Defcon One hot sauce, awarded as The Cup Of Turoninistan for having come from the second-farthest distance, Turk being exempt from winning 'cos he sponsors the award. Joanna won a yo-yo being being Youngest Blogger, sesame/honey candies were handed out and an Odd Squishy Toy was "given" to several present, all of whom rejected it. A pity, it even lights up when thumped. As far as I know, it's still at the pub! (See? Prizes! Fabulous! And you missed 'em! Tsk).
Posted by Roberta X at 7:52 AM

I'm really bummed I couldn't make it this month! I will still wiped out from hauling things to and fro the two days prior.

...and a Blackwater hat, and tee shirt that say "Filthy Hippies" in 3" letters across the front.

I suppose if a team of elite criminal killer ninjas had escaped from the imaginations of ARfcom and GlockTalk posters and the people who write "It Happened To Me" letters to Combat Handguns and busted up into the brewpub for an organized takedown, they would have made me in an instant.

Jeebus! When did I get that old?

man, I am bummed out that I missed it. I almost made it back from michigan in time, but my lack of desire to do anything after 4 hours in the car made me not want to be the guy who shows up 1.5 hours late.

The Toy went home with Shermlock.

Well, I'd love to go, win the Turon Cup and all, but it's a little awkward when I have to work...

Whoops! What is it that I spy peeking out from under that green jacket? :-)

One of these days, I'm heading east on I-70 and just may show up.

When you unfasten the green jacket, it will naturally drape, and cover the on the belt holster. That said, we've all been there, done that. Part of the rites of passage. All part of not scaring the horses in the street.

Pardon me if the idea of "a shoot me first vest" vexes.

A cop once asked me, back in the days when I was doing photo shoots, about why a concealed carry permit years ago in Los Angeles. I pointed out to said cop that I was carrying over $10k of pro cameras and gear attached to my person. 'Nuf was said, cop was happy.

In the days since, I've legally carried in the US, across most of Europe, South Asia, South-East Asia, and Africa. The only place I've heard the term "shoot me first vest," is the same places Tam refers to.

My point is, amongst folks who pay attention to training, sometimes there's a tendency to over-analyze. There's a biblical reference to the wicked fleeing where no man persuith.

Seriously, I can't tell you how many "muggles" have commented to me on how cool my photographer's vests were, where did I get mine, "All those pockets mean I wouldn't have to carry a purse -'I wouldn't know about that, Mam.' - where could they get one..."

To reiterate, I've NEVER seen or heard of a reliable instance of someone "shot first" because of an article of clothing. Ever.

Well, that joke went over like a lead balloon.

"Whoops! What is it that I spy peeking out from under that green jacket? :-)"

Other guns are on port side.

"When you unfasten the green jacket, it will naturally drape, and cover the on the belt holster. That said, we've all been there, done that. Part of the rites of passage. All part of not scaring the horses in the street."

True, but I usually wear it snapped up (it was pouring down rain) and with a Milt Sparks IWB as I do my 2nd pistol on port side (3rd gun is on my ankle).

Since Iggle Crick was closed by the po-po (they're not the boss of me!), we had to head down to Johnson County to shoot at the IDNR range and I left my OWB holster on. No biggie, people are comfortable around guns here and Indiana has no concealment requirement or prohibition on carrying in bars is okey-dokey.

Besides, most people assume it is a cell phone (or a Mylo).:-)

Man, that photo. I can hardly wait to get off these frigging 'roids in three bloody months. I feel like that bloated girl in the Willy Wonka movie. At least I can hear now!

Oops, just blew my out on charges of not paying attention (*Shootin' Buddy stares into space* Um, what didya say? Ummm, let's see, yeah, sorry you were on my bad ear side, that's it, didn't hear ya).

I'd have loved to have been there, but the lawnmower ain't gonna fix itself, and the lawn is getting high.

I was busy getting my townsfolk drunk while running the beer tent at my church's festival. Beer, music, dancing, carousing, gambling, noshing, and even a couple of fights, one that broke the church's railing. We Catholics are the fun denomination! But they were smart enough to make the non-drinker the beer man, for obvious reasons.

Otherwise I would've attended. I'll have to make a meet before snow and ice make the highway impassible.

"Well, that joke went over like a lead balloon."

I thought I ran with it nicely. I gave you an opening to make fun of ARfcommers; what more do you want? ;)

Thanks for putting the blogmeet together, Roberta. I liked that place. Good company and good pretzels.

I haven't cracked open the Defcon One sauce yet. I'm a little bit skeered.