Tam spilled the beans this morning. I'd better 'fess up. 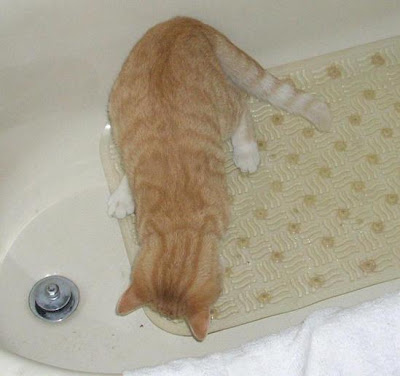 His name is Huck. He's a yaller tiger maybe half a year old and full of sass and curiousity.

He showed up in the neighborhood about a month ago and the people everyone thought owned him....didn't.

He had visited Tam and me on the porch, friendly, playful, clean as a new penny and interested in visiting the inside of Roseholme Cottage.

I liked him but I had my doubts. Too soon after my old cats; I'd just found out the vet who took care of Tommy in his final days totally dropped the ball on getting a paw print and I was, well, raw.

But he kept coming back. I left food out for him but I didn't want to encourage him too much, thinking he had a home already.

When the weather turned, one of our neighbors took him in (on their front porch, as they have indoor cats already) and tried to give him back (to the supposed owner) but to avail. And they didn't have room for another cat.

All I knew about then was he'd vanished. I had started to think maybe I had been sent another cat, but guess not. 'Til our phone rang and 'twas The Democrat, our neighbor to the North and a friend to cats everywhere. "Roberta? You remember that yellow tomcat? The [other neighbors] have him but they can't keep him and I wondered if...?"

I was interested. Promised to get him checked out right away. Last Friday I got him and took him to the vet; the weekend passed with the house divided again and Rannie (Tam's cat) had her doubts. Monday, little Huck got a clean bill of health and it has been Cat Dynamics ever since as the Cute Kid and the Elegant Lady work things out. I think he's destined to be In Charge eventually. He certainly thinks so: 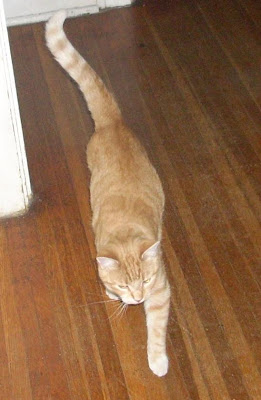 Woke up last night with him snoozing on me, purring. I believe he's a keeper.

He is fascinated with the bathmat -- and leaves footprints in the tub when he tries to peel it up.
Posted by Roberta X at 10:08 PM

Email ThisBlogThis!Share to TwitterShare to FacebookShare to Pinterest
Labels: the wonderfulness of you

He's quite dapper, and a good fit to the household.

You were good to wait and see and somehow a quote from Mr. Holmes comes to mind.

The temptation to form premature theories upon insufficient data is the bane of our profession.”
Sherlock Holmes

The ones that pick YOU are always the best.

I am glad you put up a picture, you've been chosen by a handsome, healthy looking kitty. He can't replace Tommy and Slinky, but I think between you and Tam he'll have plenty of heart to move into just the same.

What a handsome fellow - reminds me of our Joseph. I daresay the tub won't be the only spots with kitteh paw prints. Congrats.

See? Funny how it works. All of us at a distance advising you to get back on the horse and find a new kitty and one finds you.

Handsome fellow, too. Bound to be glad he's found such a good home.

He knew you were in need of a cat, whether you thought so or not. Very handsome fellow.

I thought all cats will think they are in charge.

Looks like a brother to our late Cooney. Cooney lived to be 11,847 years old. Hope yours does as well.

Those pictures are fun...he looks EXACTLY like our current feline associate, cleverly named "Tiger" by the neighbor's kids. We ended up with him after our older cat passed on.

Tiger had huge, catcher's-mitt paws, and we just had him to the vet for his shots and check-up. Tiger is now a non-svelte 18.2 pounds, and is an outdoor cat (whenever he can get us to open a door for him). Maybe you'll succeed where we didn't in limiting his food intake (including the occasional vole, mouse, squirrel and rabbit).

I think orange tabbies just have a predilection for bath water...ours likes to walk around the shower stall, licking up water, and then leave footprints across the floor as he leaves.

I'm so glad you have a new kitty to keep you company!

We had two cats of that color years ago. One was sweet and afraid of her own shadow, the other was a Tom with a weeping eye and a massive attitude :) that Dad and I rescued from a house we were working in on the east side (the resident wh--er, wife, was going to put out rat poison for it because it kept dashing into her house whenever the door was opened. Classy, not).

Like all of our passed-on cats, I miss them both. Sigh.

Oh, he's adorable. Expect him to take charge and give you a list of demands at the earliest opportunity, as orange cats seem to be bigger jerks than their other-colored peers. (It's why they're my favorite, of course.)

We have a neighborhood cat like that. Patches is being fed by three families, and has good shelter in our detached garage. Amazingly, she looks quite well fed and our mouse population is down in the garage!

Good on ya for bringing him in and giving him a home. Sounds like he's fitting in quite well

Looks like a fine feline. Glad he chose you.

Awwww, welcome to the new kitty!!

Good lookin' tom. Hope he integrates well with the rest of the household.

I do like the yellow boys, which are all Butter Cat to me for obscure reasons. (Black kittens are all Boobaby.)

May he bring you much amusement.

Huck is to be congratulated for retaining good staff.

LabRat, I always called them marmalade cats, but whatever works.

Dang, I need to make popovers.

The orange tiger-cat (same version as Huck only older and way larger) that rules from above here has a fascination with the faucet in the tub. Right now, I leave it dripping so things don't freeze while I'm gone and he's in kitteh heaven.

Good on you! I've always been sold on the yaller tabby as the King of the domestic cats. He's a fine beast, and I'm happy to hear of the addition to your home.

We just had a new addition as well--could be Huck's twin. Congrats on your new addition!!

The vet last night just oohed and aahed about the virtues of the yellow tabby cat.

Good on you for adopting the new member of the househld! You should be aware that "marmalade" cats tend to be very mechanical, and smart as a whip.
Our senior cat arrived from the pound in a Mag Lite flashlight box, and immediatly brought a rather sedate household to the point of chaos. He's been supervising household operations for 12 years, and we still joke that if he had opposable thumbs we'd be hiding the keys to the gun safe.

Roberta, I'm glad that kitty-sized hole in your life has been at least partially refilled. He looks like a good 'un.