Love 'em, hate 'em, lock 'em in the crawl space and feed 'em through the vents until the first Tuesday in November is safely past, they'll still keep on mass-mailing grotty little attacks and puffery.  Both candidates sent me oversize cards (and I didn't get them anything).  Each man has a list of reasons why the other guy is a baaaaad man and they, themselves are Slavation In A Can; er, Salvation.  Oopsie.

When I took these delightful missives from the postbox, they stacked up in such a way that I read a bit of both.  So I thought I'd do a little Art, a little mashing up to share the moment: 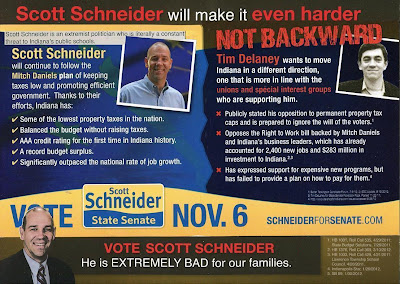 (IMO, Schneider is the better choice among the two -- the stupid rules Republicans make are usually easier to get around and cost less.  But it's like having to choose between being bitten multiple times by a purse-sized dog or stung by a small swarm of bees.  --Pro-gun bees, mind you.)
Posted by Roberta X at 7:57 PM

Email ThisBlogThis!Share to TwitterShare to FacebookShare to Pinterest
Labels: it's Art okay?, marvels of politics

Can we say Freudian slip?

Anyway, there have been a number of serious proposals over the years that each ballot contain the choice, "None of the above".

Save up all the junk they send.
Stuff the lot in an envelope and mail it back.