Or so it appears and I'm not much minded to ignore it when it happens a few blocks away: four people were shot last night (shortly before three this morning, actually) when a fight broke out in front of The Vogue, a popular Broad Ripple nightclub.  Nobody was killed but one's in serous condition.

To fully grasp the idiocy in question, here's a picture: 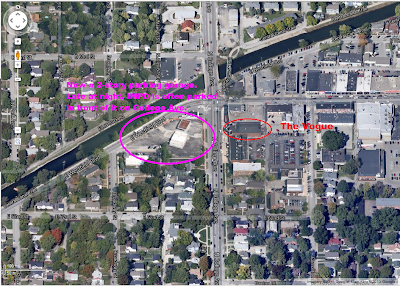 The area can be presumed to be well-lighted (and fairly busy, even at 2:50 a.m., ten minutes before bar-closing time) and IMPD seems to think the exits of the new parking garage are an excellent place to find impaired drivers; there is frequently at least one police car parked almost directly across from The Vogue.

The wounded were found around the corner, in front of a pizzeria on the even more well-lit and populated row of bars etc. along  Broad Ripple Avenue.

So, some number of young persons get in a fight, and one of them starts shooting.  --What're the chances he's already barred from being around guns?  What're the odds he's got a permit?  I've got my opinions and I'll be watching this story; for now, police say they've already got the shooter in custody. It's not looking like self-defense.

What're the odds the antis will lay this'n on responsible adults who did all the paperwork?  Or that toast will fall butter side down?

ETA: Shooter now claims to have fired in self-defense. There appears to have been an earlier argument that resulted in all four being tossed out of RA nightclub, followed by renewed contact outside.  And yes, he's got an LTCH.  I'd'a lost that bet.  ...Also, it appears that the fourth victim was an innocent bystander; which may explain why the shooter was arrested for criminal recklessness and battery with injury.

There's still more to this story, I think.  Tam's already reminding me of the rule, "Don't go stupid places with stupid people -- especially if you're carrying a gun."
Posted by Roberta X at 8:15 AM

Email ThisBlogThis!Share to TwitterShare to FacebookShare to Pinterest
Labels: eediots

But yeah, that's a sucker bet; I'm not taking it.

Looking forward to the 'rest of the story'