Tam wanted to ride bikes to the Indy 1500, and to noon o'clock me
it sounded like a great idea for many reasons.*  So we did, and we walked the whole show, and said Hi to Mike Z. and the bookseller lady and a few zillion other folks, and then time was a-wastin'.

Tam was riding straight for the Brew Pub and the BlogMeet -- it's straight up the Monon but I needed to stop by home.  My energy was flagging and I figured I'd switch to car or motorscooter.

Made my stop and decided the trouble of parking (and, in the case of the scooter, changing shoes, pre-flight inspection, etc. etc.) was just too much, and set out on the bicycle instead. 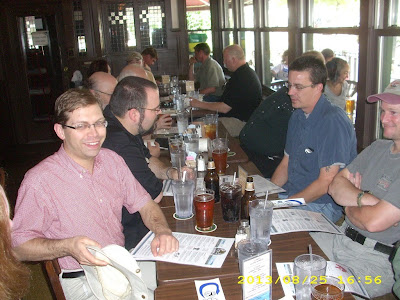 And a perfectly fine barbecued brisket sandwich and realized to my horror I could hardly hold my eyes open.

Made apologies, made my way home (downhill most of the way, or I wouldn'a), made my way to bed right about 5:30 ex poste meridiano and except for a brief bout of wakefulness elevenish, snored there, largely insensate, 'til right before six ayem, when Huck the Cat began trying every trick he knows to get the Big Giant Monkey In Charge Of Morning Feeding (me) outta bed.

It was a pretty good Sunday.

Sounds like it was a fun time. Sorry we missed it.

(Saw that sign by the side of the road: "Indianapolis 110 miles". Noticed that the clock on the cell phone said 2:30 even though the one on the dashboard said 1:30. Cursed myself for failing to remember that the part of Indiana that's on Central time includes me, but not you. Realized that even if my car _could_ go 180mph, it'd attract the sustained attention of every cop in three counties by doing so. Sighed and turned around.)

Next time, for sure. *sigh*

Heh. I, too, have noticed not getting any taller. The persnickety chart actually doesn't go that high. I'm assuming I should be seven feet something. Considering the interest I have in exercising.....