Indianapolis has the eighth-best city flag in the United States, according to a survey of vexillologists -- then again, they rated Chicago's the highest, so I'm not so sure I'd trust them. 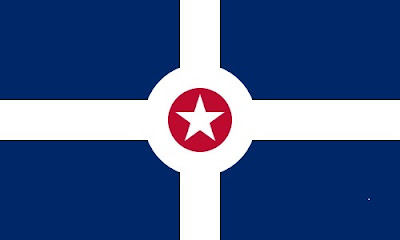 If you're at all familiar with the city, the flag makes good sense, with Monument Circle at the heart of downtown.  Strictly speaking, the main east-west road, Washington Street, old U.S. 40, runs a block south, while Market Street intersects the Circle, then dead-ends a block west in front of the State Capitol building.  But who's counting?  "Crossroads of America," the motto reads, and the Circle's our crossroads and there's Hoosier logic for you in a nutshell.

I work at one of a very small number of businesses that fly the city flag -- on one of the few blocks where two different buildings fly the whole array of national, state and city flags.  It's kind of inspiring, sappy though that may sound.
Posted by Roberta X at 7:32 AM

Email ThisBlogThis!Share to TwitterShare to FacebookShare to Pinterest
Labels: it's Art okay?, marvels of government

Design-wise, I have always liked it. I was never sure why it didn't catch on, other than the fact that installing and maintaining three separate flagpoles (US, State, City) may not be popular, budget-wise. Flags are expensive (I paid for quite a few when I was secretary-treasurer at the Masonic Temple) and they last only about 6-12 months in the weather.

For Chicago, perhaps a black flag with the Eye of Sauron would be more appropriate :)

I looked at that list and I'd have rated Indianapolis as #2 right after St. Louis. The rest sucked. Like, sucked really bad.

I once did an inspection on the Annin Flag Company's New Jersey location (I think it was Newark) and they gave me some info on flag longevity. From their website...

"How long will a flag last? This is no exact answer. The U.S. Government generally expects a nylon or cotton bunting flag to last approximately 90 days, based on daily usage from sunrise to sunset – but not during periods of inclement weather. Tests have shown that in some cases a flag flown 24 hours a day will last only one-fourth as long as one flown during the daylight hours only."

That doesn't seem very long at all, but looking at damaged flags really bothers me.

Sean, the Herald. (at least I was one when I was in the SCA)

The ratings were based in part on how many people made a tattoo of the flag.
My hometown came close to rock bottom. But I don't think many people want tobe tattooed with the phrase "Condita 1630 AD".

A candidate for weirdest flag: the flag of Sicily.

I think it's a neat flag too.

And yeah I'll have to echo Sean, I think it should be higher on the list.

There's something to be said for the stark elegance.

(Even if the literal crossroads depicted... aren't. But hey since the 465 was put in the actual crossroads avert the city, or pass between the splits to the east of downtown anyway...)

Indianapolis's flag is a great design, but why does a city even have a flag? I only learned they do a few weeks ago, when the local (Grand Rapids, MI) newspaper published an article about how the Grand Rapids "Ms. Pacman" flag ranked. It's not supposed to be a video game character, but a representation of the city's Calder sculpture,

silhouetted against the rising or setting sun. To me, this sculpture looks like a piece of construction equipment after a horrible accident. It looks quite different from different angles, and the angle used for the flag is maybe 20 degrees off from the angle of the most widely published photograph (the 2nd one in the Wiki article). It might be more recognizable if the flag didn't depict it floating in air and cutting into the edge of the solar disk. That just makes the flag look like a lipsticked pacman.