Tactical Solutions responded promptly to my telephone message, at least as I measure "prompt" in my trade -- they called me about 2:40 this afternoon and after a short discussion, offered to send me a couple of the proper screws (4-40), free!  Once he had my address, the technical support guy started to suggest I put a drop of Loctite on it at the same time I started to asked him if I should use the stuff, so I'm taking that as a good sign.

They're good folks.  I liked their receiver on my Ruger Mk. II from the very first and this degree of responsiveness over a ten-cent part that I should've been keeping a closer eye on after the first time it loosened up (after thousands of rounds) is impressive.  They build a first-rate product and have provided first-rate support.

I happened to be barely off the range when he called and had just washed up in the little prep/clean-up area at Indy Arms Co. I don't suppose the occasional background boom from someone shooting on the rifle range hurt my credibility any.

As for the range trip itself, the Ruger/Pac-Lite ran fine through a hundred rounds with my temporary repair. I switched to the EAA Witness Compact* (a small-sized CZ-75 clone made by Tanfoglio) in .38 Super Auto to finish out the session.  Pro tip: Winchester white box .38SA in short-barreled firearms produces an impressive flash.  It's not any dirtier than anybody else's and the recoil is not noticeably different, but it's great big stupid fun if you're not inclined to flinch.  Me, I dropped three flyers low and left, I think right into the eight nine ring (see photos to follow), each one at the start of a string.  Anticipating?  Probably. 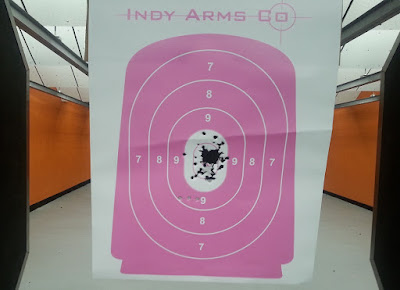 Otherwise, I kept almost everything within the ten ring (the two on the edge count as nine).  Not terrible at seven yards.
_____________________________
* EAA has their fans and detractors but in my experience, the little metal-framed Witness in 9 and .38SA has been good right out of the box.  They had big, three-dot sights as standard and they run without any "tuning" or fiddling.  Not the Ferrari of guns, no -- but mine shoot nicely and dependably and like any good gun, they're more accurate than the shooter.  A used Witness in decent shape is a good value.  There has been one safety notice that I know of but it tells you right in it what to do.
Posted by Roberta X at 5:06 PM

I had to drill & tap the barrel of my Smith Model 41 (vintage 1968) to attach a Weaver rail in order to mount a dot sight. After about 50 rounds, the shots were all over the target. Come to find out, the screws securing the Weaver rail had loosened; I was quite surprised, as I consider the recoil of that pistol to be mild, at worst. R&R'd the screws, using some LocTite thread locker, and have had no more trouble in many thousands of rounds.