Indy Arms Co., the gun shop in my neighborhood at last!  I've shot on their range three times, peered at the display cases, purchased ammo and picked up a range membership.... 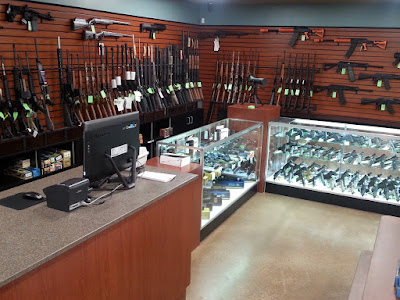 Indy Arms Co. is a nice place.  The staff is friendly. 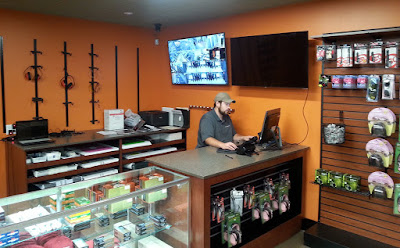 This is the check-in area for the range. See the big monitor? (The one that's lit up.)   It covers both ranges.  There's an RO in the range while you're shooting, too. 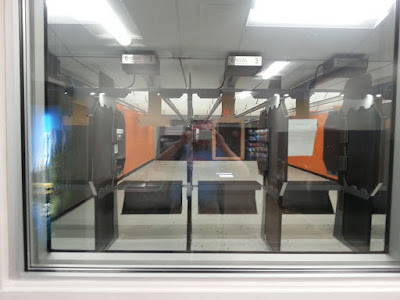 The pistol bay is six lanes, clean, quiet (they have some kind of high-density sound blocking/absorbing material on walls at and in back of the line) and well lit.  This was photographed from the washing-up area.  There's a "sound lock" between it and the ranges -- yes, there's a rifle range, too.  I haven't been in there yet.  (It doesn't have a viewing window.  Pistol-bullet-resistant windows are merely costly -- rifle bullets come out with a tad more zip.) 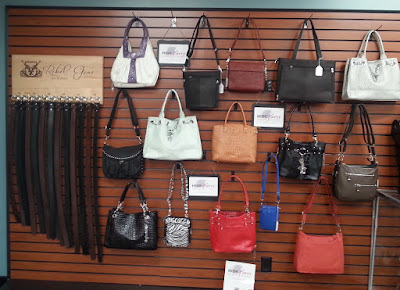 The store has a women's section and it's not pink guns.  The belts are less utilitarian-looking than the usual holster-hanger, but strong and well-made.  And they have a nice selection of carry handbags.  Just out of the frame, there's a display case of "unisex" off-body carry hardware -- notebooks and such.  They've got a nice assortment of holsters, too. 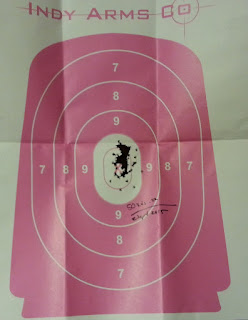 I seem to do okay there.  That's fifty rounds of .22 LR at seven yards, all inside a roughly B-27-sized ten-ring.  Mostly the Ruger Mk. II, a few from my High-Standard R-101 revolver.  Want more of a challenge?  Okay; the range is over forty feet long and there's a light dimmer for every position.

I'm jealous :) I wish someone would put one about a mile north of my QTH.

Nice review. Appears as if I may need to make the 3 hr drive required to check it out!

Bobbi: I find the Rebel Gear line of "contoured gun belts for women" intriguing, and maybe now the xYL will stop with the off-body carry.

FC: Gun shop always seemed to be one of those "Best way to make a small fortune... start with a large fortune" fields. Maybe not. Enough shops around here I never felt tempted to test whether or not I could run a successful business...

My largest concern in getting involved in firearm retail is the same as when I was thinking about moonlighting at a book store or an electronics shop, getting into your own product. As any good dealer will tell you using your own product really effects the bottom line.

JayNola: that's doubled and redoubled for a gun store, as the record-keeping requirements require a bright line between your personal guns and the shop's guns. I am given to understand that becoming too casual about the distinction is a sure recipe for awkward moments with the ATF.

Great review. I have to check it out sometime.