Home On The Range?

I went back to Indy Arms Co. yesterday to shoot.  Yay! 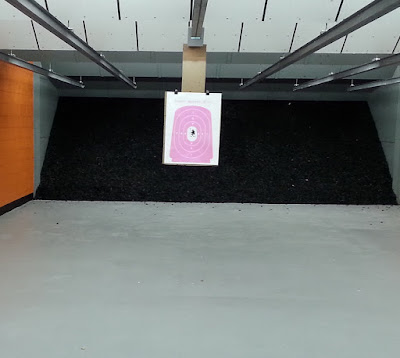 Add another sixty in 9mm from the EAA Witness Compact: 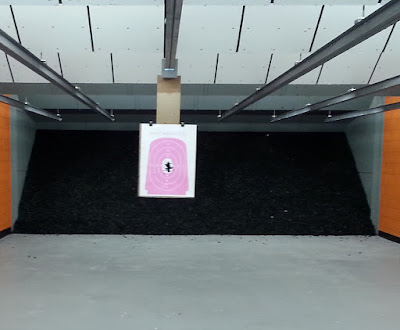 Here's the shooter's-eye view.  About that blurry for me, too, when I (try to) focus on the front sight. 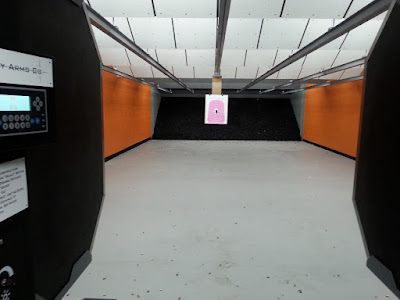 Wanna shoot gooder?  I'm not an expert.  I'm not even much of a shot.
Here are tips I have picked up from others, who shoot much better:

1.  Take a basic class in gun-handling.  Learn how the thing works and how to hold and handle it.  Learn the Four Rules.  Apply them.  Consider other classes but concentrate on mechanics -- you can learn how to be tactical once you have learned how to shoot.

2. Turn time and money into noise for twenty years.  Seriously, spend more money on range time and ammo than equipment.  Put in as much time on the range as you can manage and leave the fancy gun and trick sights for later, if ever.  Shooting is a learned skill.  Maybe some people have a knack -- but the person who shoots a lot and carefully can outshoot the "natural."  Most guns shoot fine.  Most people could shoot better.

3.  Focus on the front sight.  Put it on the target and align the back sight.  Line them all up, both sights and target, and squeeeeze the trigger in a single easy motion.

5. If you're no good at seven yards, start closer and move out a little at a time.  15 or even 12 feet is okay for beginners.

6. Hold the gun as high on the grips as you safely can.  You don't want a gap between your hands, either.  Hold the gun tighter than seems necessary.  Use both hands, this is not 1804 and you're not Burr or Hamilton.

7. Start with a .22, you're a lot less likely to have to unlearn a flinch.  Start with a semi-auto, they're easier to get competent with.  Once you're comfy, consider a double-action .22 revolver to improve trigger control.

8. When your hands start to waver, when you have trouble focusing on the front sight, when it's not fun to see a hole show up in the target, that range trip is over.  Wash up and go do something else.

Back when my eyes were better and I could shoot in bullseye competition, my personal mantra was:

When things went just right (about one range trip out of twenty) you could almost push thee bullet into the center of the target just by this semi-zen process.

People always asked me why I shot so much (at least once a week), and were usually surprised when I'd tell them that I found it peaceful and relaxing. My problem was that I could never get into that zone of letting go when I was shooting for score, rather than practice. Too much thinking about it, or something.