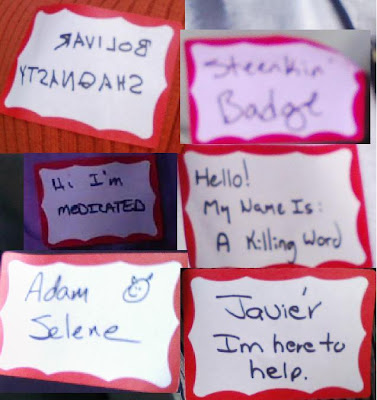 Would I lie? First, a small sampling of badging; as you can see, bloggers are a creative and variegated lot. Or is that "vegetative?" No, I think not.

It was a splendid day in Broad Ripple, mostly sunny but coolish, air as crisp as fresh apples. That being the case, we encamped upon the terrace. Or patio, or veranda (no, that'd have to be elevated) -- loggia? H'm, 'spect not, implies a formal colonnade not fronting a building.... Fine: outdoors. However you'd say that in Belgian (actually, you'd have to say it twice, so that'd be two words I haven't got instead of just the one).

There is a very nice outdoors area at Brugge, which looks toward a deck that overlooks the Monon Trail and past it to Broad Ripple Village proper, vide: 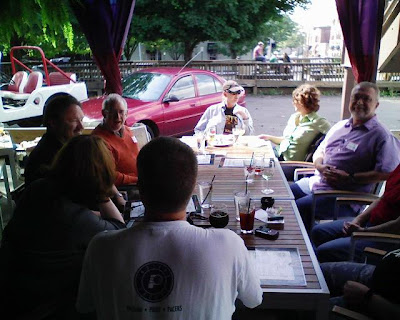 I sort of blinked (flinched? Reminds self: cameras have no recoil) and must therefore apologize to Wayne and Mrs. Shomes, who are mostly out of frame to the right. We are, at the time of the photo, after first drinks and just before food, which I should also have photographed but was, in fact, too busy inhaling; which is to say the food there is goooood. We will be back!

See you at the next Indy BlogMeet? It's already pick-an-October-Sunday time, so let me know what'll work for you!
Posted by Roberta X at 7:35 AM

Later is better for me.

I'll go with Tam's timeframe, the 25th.
Too many scouting things going on the 1st couple of weekends.

Any weekend but the 10th/11th. I'll be shuttling my crap and retrieving my kitty all day, both days. AFAIK, the 25th is free.

The Indy Gun show is that weekend so the 25th would work for B and me, especially if it's a little later in the day. I think the show runs until 4:00 and we'll have to get packed up and such. Could possibly be there by 4:30.

Hmmm, thought I'd voted. Mebbe not.

Anyway, I'd prefer the w/e of the 25th. Mrs. Crucis is free that weekend and we may be able to trot over for a visit.