Sights For My Sistema

After giving a lot of thought -- and a lot of shooting time -- I decided to have big sights (nice Trijicons!) put on my Sistema Colt. It returned Saturday (what a coincidence!) and I took it to the range Sunday afternoon prior to the BlogMeet. 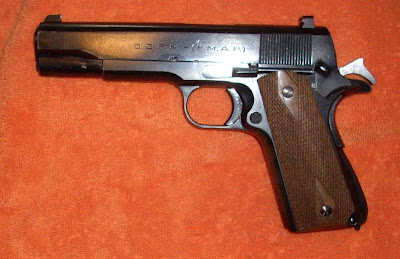 What an improvement! The old Argentine 1911A1 is very nearly a tackdriver even in my hands, and that's sayin' something. Looks nice, too.

The gunsmiths also fitted the safety to the sear (remember the drop-in Cylinder and Slide kit I installed?) so it's got a nice detent now, did a relief cut on the sear and generally touched it up. They even staked the grip bushings. (On 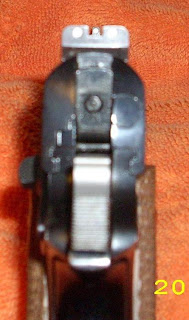 e worked loose at the range, probably a bit short on thread engagement -- I had to retap the frame earlier and it may be there wasn't enough metal there for the staking to hold. I can't blame the 'smith for that!* Maybe it's time to think oversize). Trigger pull is now even better than before, smooth and consistent.

I'm told my gun received a few admiring looks. It's very much what I wanted it to be, a traditional "old school" 1911A1 with modern lockwork and good sights, improved enough to function well but not all glammed up. I'm happy with it.

This gun is simply nice to shoot, and I say that as someone who was never all that fond of calibers that start with .4; at the range, I was going back and forth between it and my Ruger Mk. II .22 and it really is amazing.

I still need to buy more good magazines -- I've got two modern, padded-base ones, a couple of good old mags and a stack of generic gun-show beaters, good enough for the range but not dependable enough to carry. Can you ever really have enough magazines?

PS: BlogMeet photos this evening; these were already uploaded.

That'll do! Col Cooper would approve!

Same sights I've had on my Sistema for a while. Yours came to you in considerably better condition than mine did to me, so mine's got a bit more 'smithing than yours.

I expect your Sistema will serve you as well as mine has served me. And don't be surprised if folks start offering you serious money to part with it. I'd recommend you don't.

Trijicon sights can also function as a night-light, showing you where your gun is on the nightstand, without turning on the lamp.

"And don't be surprised if folks start offering you serious money to part with it. I'd recommend you don't."

I'll note that Roomie's Sistema is devoid of import marks. It's yummy (and she stole it at only three-and-a-half bills.)

Hey, that's starting to turn into a gun! Now all you have to do is get rid of that evvviiiiilllll hand-eating hammer, and you'll be all set. Seriously, spur hammers are the devil's work.

Hammers depend on hands. Some hands never get a bite, some have to have a bob job. To each his own, but the spur looks more "original" if you can stand it.

On the other hand, magazines are the real Dei'ls work. Some of those suckahs look like they ought to work, some cost enough to work, and a few do work. The ones with the horse seem to do best on all the 1911's around here.

Caleb: on hat hammer, three words fer ya: Cylinder & Slide. If you don't like it, your arguement is with the 'stache.

It is mildly bitey; I don't mind it. The original wide-spur hammer, on the other hand, went beyond mere vampirism to anthropophagy.

Stranger: as long as it's a real prancing pony! ...I've got a couple of major-maker (aftermarket) mags that are more than fine, though one of them is presently hiding from me. My ex left me his collection of generic gunshow junkers, some of which will feed my Ballester-Molina, poor battered creature that it is.

Og, I dunno. Just picked some up to try today. Cripes, I hope I can get the grip screw and bushing apart!

James: it's a keeper! I'm very proud of having spotted it in a mixed case of somewhat well-used 1911s.

...And I sure hope Col. Cooper would approve! Now my .38 Super and .45 are essentially twins, which is good thing. Considering a high-zoot barrel for the .38SA....

Loctite is temperature sensitive. Red loctite will melt and cut loose if you warm it with a lighter. Or if you hold a soldering iron on the screw for a minute or two, even red will come right loose.

It wasn't Loctite that was worrying me, it was that I'd tightened the screw at the range and felt the bushing give way.

When I took the grip off, top screw came free, bottom came out with a stripped bushing, nice line on what was left of the threads showing where they'd staked it. I used some good pliers with the right profile to grab the bushing, took the screw out of it and pitched it. Ran a tap through the frame again (staking...), picked the best of my old bushings, test-fit, then purple Loctited it in. Waited a spell and put it all back together.

I knew about the heat freeing Loctite trick, the pan/tilt heads for our portable 2 GHz gear are all held together with (red) Loctited screws. Big damn unfun to take apart when they fail!