Management is new but there were familiar faces among the ROs and we were happy to see them.

Sign-in is more obvious than old system, one stops at the card table and sunshade right at the demarcation between the parking lot and the range proper to pay or present one's pass.

Note, too that the building is open! Tactical Firearms Training was running a class; I didn't think to ask if this meant that, maybe, range customers might have access to modern plumbing if we asked nice but I have my hopes!

[CLICK TO EMBIGGEN]
There are new range rules and an additional clearing barrel (at left in photo). IMO, the one to the right of the entrance to the brick training building is better-located, with thick walls on each side and set to point you away from, well, people and (most) property. --And you will be using one or the other, as that rule has not changed: no loaded firearms anywhere but at the firing line. --Most of the rules are essentially the same but everyone gets a refresher, their very own copy and signs for it on their first visit of the season.

The range itself is to the left of the photo, a large, concrete block structure hidden by the classroom trailer; if you look very closely near the truck and green dumpster, you'll see one of the entrance walls.

Inside it's pretty nice: two huge bays of 8 lanes each; the "far" bay is generally for classes or overflow, the "near" bay for plain ol' shooters. 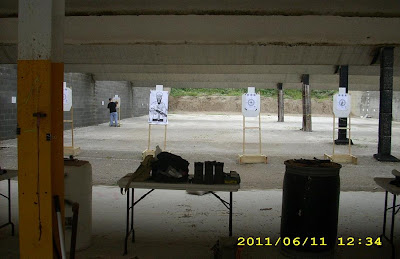 Targets are at the seven yard line; you can move them but I figure they should be far enough to make my mistakes show up and close enough that I can see those mistakes from the line. 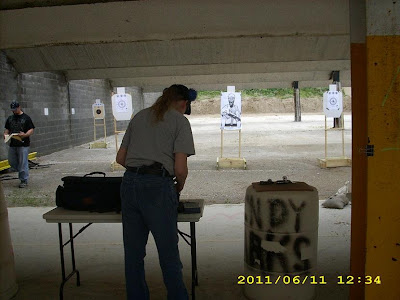 Tam and I set up near the entrance end. That's her "Zombie Terrorist" target, which sparked spirited discussion among onlookers if it was more apt or less apt in light of recent SEAL pest-control actions. The consensus seemed to be "more," with a minority holding out for adding gills and fishscales. 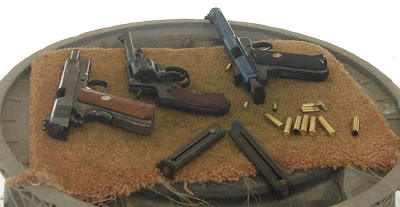 Here are some of my toys -- yes, with Nagant revolver ammo prices down to only mildly painful ("Save that brass!"), I took it along. Y'know, for those people concerned they might shoot someone, the Nagant is about perfect: odds are pretty good you won't even if you wanted to. Still, if you can keep shots on paper with that long, hard, stack-y trigger pull, you can probably shoot adequately with any DA revolver. --I admit it, I gave up and did about half of 'em single-action, in which mode the Nagant is a soft-shooting revolver with a merely lousy trigger.

Also pictured, my overpolished-but-faithful .38SA 1911 and my Ruger Mk. II .22 with the Pac-Lite upper, both a pleasure to shoot.

It was a pleasant way to pass a morning. The Jack was shooting a few lanes down and after we'd all adjourned a couple hours later, joined us at India Palace for their lunch buffet. Delightful, as ever -- and if you have wanted to try Indian food, there is no better way. (First time? Try tandoori chicken, so good The Colonel would steal the recipe if he could. Cold chickpea salad, some naan and/or rice and there you are, a lunch even the most timid palate can enjoy) .

A splendid meal in nice surroundings, especially at the $10.00 per price! --India Palace and Shalimar are owned by Dave Samra and are very much a family business; the food is remarkable, the venue spotless, the service remarkable for both speed and unobtrusiveness.
Posted by Roberta X at 10:05 AM

"That's her "Zombie Terrorist" target, which sparked spirited discussion among onlookers as it being more apt or less apt in light of recent SEAL pest-control actions. The consensus seemed to be "more," with a minority holding out for adding gills and fishscales."

You don't have the .32 acp cylinder for the Nagant?

My dad has one around here somewhere.

Also hav a few boxes of Nagant ammo. got a good price from a shop that was going out of business.

I was asking about the nagant revolver a while back.

Would you buy it now, knowing it so well?

John B, for what I paid ($120 or less), it's fine. The only better deal was the Star Model BM (9mm semi-auto) that was going for about that much several years back.

One of my goals with revolvers is to not have one Tam has. This certainly fills the bill.

At the price, I suppose it'd be an okay Bugout Bag gun with the .32 cylinder, if you routinely carried something better and it was a last-ditch thing. And if it got stolen, you're not out much, nor is it of much practical use to anyone who hasn't shot one before. (Heck, I had to ask Tam for a reminder on the ejection mechanism, such as it is).

Hmm. The Pac-Lite uppwer being the actual firearm and all, would it be correct to start saying "My Pac-Lite .22lr with MKII Grip frame"?

Ah, Indian food. For years I was mystified by the chicken. How did I get a chunck of breast with a legbone attached? Why is there a wing attached to this thigh? Finally, at a company lunch at a curry-vindaloo kinda place years ago, I asked the Senior Brit (well, a Welshman, but who cares), who had spent no small amount of time in the subcontinent how it was that the Indians ended up with such odd chicken pieces, how indeed did they cut them up? His answer, in a word:"Expolsives".