I Can Has Radio! 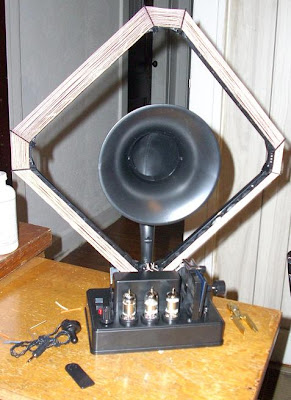 Made by Japanese kit-company Gakken, found here at the MAKEr Shed Store and built a little bit at a time over the last few weeks, it played immediately when first powered up. Considering there's not a single soldered joint in the user's assembly (the main electronics are on a pre-assembled PC board) and that the coil/antenna and variable condenser are among the you-build-'em components, that's pretty impressive. I was fretting badly over the nifty loop antenna as I wound it this afternoon -- that's Litz wire, which arrived wrapped around a little card with several kinks and I kept having to stop, clear the kink as best I could, lose a couple of turns on the loop and start over.
That's my only gripe, though. It showed up packed as solidly and neatly as only a .jp company can do, complete with a tiny screwdriver for the tiny screws that hold it all together; MAKE's translated instructions (downloaded from their site) are clear and straightforward and all you need supply is a little cellophane tape and a modicum of patience. 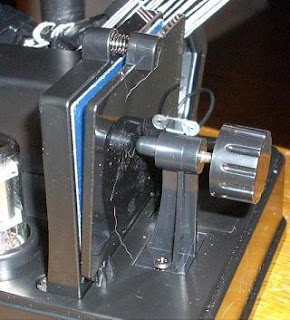 The variable condenser (capacitor, in modern parlance) is worth pointing out. (Please excuse the cat hair and floobydust, the plastic holds quite an attractive charge). It's a book-plate type, invented by Crosley and most famously used in their "Pup," a one-tube radio of about half the footprint of this three-tube job. As far as I know, no manufacturer had made one in the last 70 years. So this little toy represents the resurrection of a technology that had just about vanished; I remember seeing a radio mag from the 70s at a used book store that had a homebrew version, a bit large and kludgey but effective.

This book-plate condenser gadget is half of the tuned circuit that picks one station at a time out from all the ones on the air. The loop antenna is the other half, and its electrical value is fixed; the condenser is variable and lets us slide from one end of the broadcast band to the other. The simplest form of any capacitor is two metal plates insulated from one another and that's all this version is. You can see one in the photo, insulated from the other by blue plastic. The plastic pieces that support them are hinged together at the bottom, a spring visible at the top tries to force them apart and the knob at right turns a fine-thread screw that moves the right-hand plate to and fro. What could be simpler?

So, here I sit, blogging and listening to whatever it is you find on the medium-wave "AM" broadcast band these days (Tam, as I tune from a call-in show to Mexican Polka: "Will this make our brains explode or atrophy?") -- on a three-tube regen set without an earth ground or an outside antenna. Pretty kewl stuff!
Posted by Roberta X at 4:39 PM

Email ThisBlogThis!Share to TwitterShare to FacebookShare to Pinterest
Labels: Geekery, marvels of science, the wonderfulness of me

No soldered joints? How did you wire the tube sockets?

Uses only 45 volts? What kind of tubes?

I guess you can tell, I think it's
fantastic!

I've never listened to a tube radio powered by batteries. I bet it sounds interesting: no 60 cps hum at all!

DC sets can pick up a little hum from the power lines but it's all pure 60 cps, too low for most headphones or small speakers to reproduce. The usual radio hum is 120, 180 and 240 Hz, sneaking out of the power supply.

45V: five 9s hidden under the cover in the center. Tubes are Chinese 1.5-volt types with non-RMA numbers: a pair of dissimilar small-signal pentodes for regenrative detector and audio preamp and a 3S4-equivalent "power amp"

Tube sockets and other parts arrived soldered to a PC board with flying leads. I freely admit this is cheating but the end result works like a charm. :)

In the basement, I have my version of a tiny two-tube set that John Huntoon, later of the ARRL, wrote up for "Radio" magaine the int 1930s. It's battery-operated and one "problem" with it is that it tunes so sharply, it's difficult to find the ham bands. That one, I built from scratch, including the metal cabinet.

Tubes...I remember going to the local store for them, with my father, when I was a kid. Every check-out line had a kind of sizing card to make sure you got the right tubes. I always thought the way they glowed when powered up was pretty cool.

Oooh, that is pretty.

Plus, Makershed has lots of cool stuff. The TV-B-Gone is tempting.

You, ma'am, are a geek and a nerd of the highest order.

This statement is said with a great deal of admiration.

Wowee!
That is so cool!

that is made of win. does the win come in the kit or do you haveto supply it yourself? either way- whoohoo!

I KNEW this tran-sissy-ter stuff was just a flash in the pan!

AND it'll work after the big thumpin' EMP that's associated with the nukes the Russkis gonna drop!

Would note that I have NEVER before come across a reference to a book-plate condensor. Fascinating!

And, in further evidence of the scarcity of info on said condensors, you are now the number 1 reference returned by a Google search for "book-plate condensor".

(This is the point where you tell me the subject is fully covered on page x of the 19?? ARRL handbook, right?)

That is so cool!

My brother and I built Heathkits back in the late 60s and early 70s. One started us out with a crystal radio then gradually added tubes and went through various types of radio architectures until we ended up with a super heterodyne receiver. It still works.

Between us we have three degrees in electrical engineering and each have a patent in the field.

I remember the tube testers in stores where you could bring in the tubes you thought might be weak or dead and purchase replacements. For some reason I don't remember when they were pulled out of the stores. They just sort of faded away.

Thanks for the flashbacks.

My first kit was a little crystal set when I was about nine. My dad put up a 100-foot long-wire antenna for it, and I was able to listen to clear-channel AM stations until I fell asleep.

The next kit was a three-tube super-regen receiver, from Lafayette as I recall. My first experience with a soldering iron; I learned that there is a hot end and a cold end, and to always pick it up by the cold end.

And the last kit was a Heathkit ("Grief-kit") Two'er, a little lunchbox-sized two-meter transceiver that I put together for the local Civil Defense organization.

And after that, it was off to college. Ahhh... halcyon days.

Reminds me of the stuff we used to build when I was a kid in the early sixties. One of my early projects was a cat-whisker radio which used a tarnished penny for the detector, a safety pin for the whisker, and wire wound around a TP tube for an tuner. Good stuff.