The Stardrive: A Photo-Essay

Here's what a stardrive field "generator" (so-called in the popular press) looks like when it is (almost) ready to get to work. Coolant hoses have not yet been connected, retention rail and outer door are still off:


Pretty kewl, hey? The primary cavity, wrapped around the phantasmatron, is under the big cylinder and just above the fat electromagnet.

The thing we found in it is shown at right, not so far off actual size. 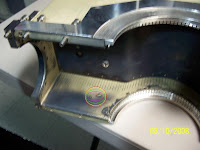 And here's the damage it caused. Gee, doesn't look like much, does it? It doesn't take much to gum up the whole works and there you are, a bajillion miles from nowhere, with a silly look on your face hoping the Captain is in a really happy mood and the Enviro gang hasn't messed up the greenhouse again.


The inside of a stardrive assembly is nasty -- oxidation and fine, fine, fine dust from the high-pressure filtered air, droplets of coolant and so on; so you wear nitrile gloves. Blue nitrile gloves, with heavier gloves over them so they don't get torn up quite as quickly. And you work in pairs. Just sayin'. (I swear I never chased no research subject or like that. It's a coincidence. Honest). I'm reaching in through the hole left in the secondary cavity (after removing the tuning dome) with a hex driver to unbolt it from the primary. Note the ample, comfortable work space: that and the easy, short hours are a couple reasons why folks are not just linin' up to work in the Just-Barely-Faster-Than-Light Engine Room crew on this nation's starships -- or those of any other nation, most of which are, when compared to ours, frankly, goshawful.
Posted by Roberta X at 1:23 AM

Email ThisBlogThis!Share to TwitterShare to FacebookShare to Pinterest
Labels: I work on a starship, marvels of science, the wonderfulness of me

Two By Two. Your secret it out.

That screwdriver near precision machined surfaces makes me cringe..

But then, I used to make stuff with obscene surface finish requirements.

hard to tell from the picture (im reading this on a phone) but is that an esciot final?

HTRN, it makes me cringe, too -- but most of the stardrive is assembled with Allen-head cap screws and the tool in my hand is a ball-head Allen driver, much safer around close-tolerance surfaces. The painful ones are the teeny cheese-head slotted screws that hold the fingerstock contact surfaces (see photo 3). They have to be dammit-tight, so the kit's supplied with extra screws; you dig out the gunsmith's driver, find the best fit, save all the old fasteners and resign yourself to having to swap out a few when the driver slips. Naturally, there's no way to get the driver lined up with the screws; you get degree-of-difficulty points for that.

And the real pi$$er is that you've realized by now that the little red piece of plastic was probably carved off a shipping plug/cover.

Wow! That makes my old Klystron tube collection look weak in comparison. But we had some high-output Traveling Wave tubes in my military days that would give it a run for the money...

Rickn8r: got it in one. There are a pair of half-inchish fittings (some verdammt BSP thread)right below where the primary cavity wraps around. They get hooked up before installing the cavity but they routinely arrive with little red plastic stopper jammed in 'em and this set was espectally tattered. Maybe a bit stuck on one of our gloves?

Ah, the perversity of inanimate objects.

Gewehr, my new pal (I've seen your blog now!), the .mil power tubes have one thing all over my toys: a whale of a lot more gold plating! Silver's good enough for (most)civvy apps (I'm pretty sure the IOT's contact rings at the primary have a smidgen of gold) but when it's blame well got to work, nothin' beats Au all over. All things considred, it's one of the better uses for my taxes.

Roberta, here's a tip for the next time - put a piece of masking tape over all but exposed tip of the balldriver/screwdriver, if it isn't coated. Gives some measure of protection. Another option is plastidip.