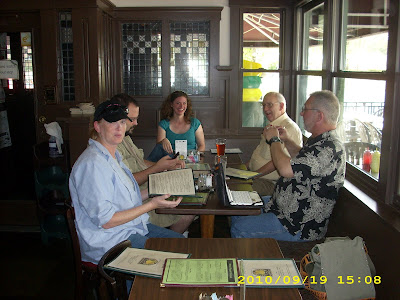 Joanna shows off her "pegleg" ankle, healing nicely (and intact): 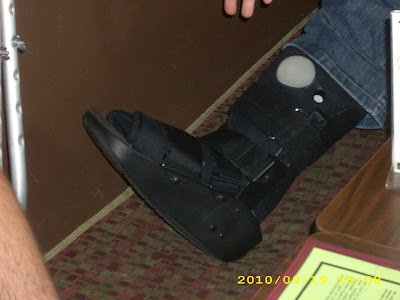 ...And now it's later. H'mmm, conversation ranged from insanely awkward theater lighting to the need for a "House of Repeal" in FedGov to Tam's odd dreams and even further afield; perhaps the winner was Joanna's report, when her doctor walked in on her taking a photo of the incision to fix her ankle, that when she said, "Just taking a picture for my blog!" his response was, "Oh, you're one of those people...." ...I guess everyone is somebody else's "those people," really.
Posted by Roberta X at 2:40 PM

I just woke up. Roberta check your email in about a minute for a chuckle.

Sorry I didn't make it. Not enough hours in the day :(

I realized, like two seconds after she took the picture, that I still had my ponytail tucked down my shirt collar because I'd driven over there with the top down on the Zed Drei and "The Trees" cranked up on the stereo...