No, no, not the Greeeeeen kind of greening -- I'm having the house painted.

The old color is a very dark rose shade (well, of course) with white trim. Nice enough but I wanted something more restful. After a false start, I've gone with a medium grayish-green and cream trim; I'll still have a little bit of the old cranberry/dark rose hue for minor trim, like brackets and the funny little trim piece at the very peak of the roof. Here are the basic colors, plus the overly-wasibi green and butter-yellow I tried first: 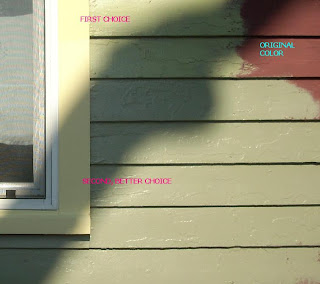 Yes, the old paint is kind of awful and the siding, most of it 1924 original, has seen better days; this is the West wall, which takes the brunt of incoming weather. It faces the well-fenced back yard, so I don't mind conducting experiments on it.

My oldest nephew (way growed up and doing freelance handyman work between jobs) will be doing the painting. He'll scrape the loose bits off and prime it first to control bleed-through. Should be...interesting.

I also picked up some patching mortar for the foundation -- I don't expect I'll do all that great a job but there are some pretty big gaps between the blocks that want filled on the walls of the tiny crawl space under the kitchen extension at the back of the house. (Roseholme is an irregularly-shaped house over a square basement, with a small crawl spaces under the front half of the living room and a leeeetle one under the back third of the kitchen. I don't know why -- maybe it was cheaper?)

Got the test-painting done, came indoors, had a soft drink and decided to lay down. Three hours later....! I blame some of it on a very tasty late lunch at a new Broad Ripple eatery, which will be the subject of a later post.
Posted by Roberta X at 9:47 PM

Email ThisBlogThis!Share to TwitterShare to FacebookShare to Pinterest
Labels: Geekery, marvels of science, to not be a fly on that wall

Painting really sucks! My Father can cut in a window free hand and generally paint the crap out of anything. No drop clothes, masking tape, etc. I did not inherit that skill however!

I will say that I have learned that surface preparation is 90 percent of the battle!

I'm told that caulking the boards can make a big improvement in heating cost and comfort. Obviously, you have a lot of boards.

SB: As I have so often explained. "Roseholme" is a sly way of referring to both my family name by way the grant of arms to a (probable) distant ancestor.

That grant was a "naturally-colored" rose on a silver (or white) shield. ("A rose, proper, on argent.") The conventions of heraldry are such that it almost certainly specifies either a red rose or a Tudor (white-on-red) rose, so I can take some comfort that my ancestor was not a Yorkist. ;) (Joke explained here).

The cross-connection to Rose-Hulman Institute of Technology is a mere accident of nomenclature.

...Thereby explaining why my uber-geek cousin transferred to Purdue's Engineering school (EE, I think) after three years at R-H: he wanted a more normal environment.