...A very late lunch or possibly an early supper. One of my coworkers (Lance, the Atomic Ferret) had mentioned a new restaurant serving Indonesian food (and possibly soon to add Dutch, which is kind of historically accurate). It's called Garuda and it's gooooood! 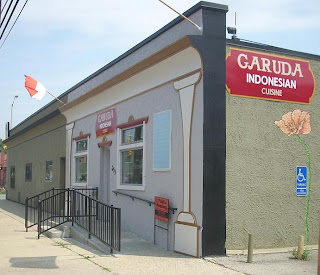 Tam and I stopped by, thinking to check the hours and come back later. The door was wide open and the place looked inviting, so we stopped right then. (Tam has the bigger picture on our afternoon.) 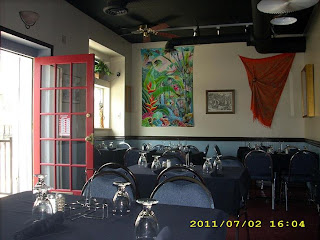 Indonesian cuisine has a little in common with Thai and Indian but takes the spices and staple foods of that part of the world and gives them a different twist. We started with spring rolls; the wrapping was a different batter than one usually sees, and soft rather than crunchy; the filling was different too, and very tasty. And while hot and sweet condiments were available, they, too were different -- the hot a delicious but not overpowering chili sauce rather than mustard and the sweet a tangy spiced pineapple puree.

I had cold chai tea, a very refreshing drink. I like spiced tea and this stands out, more like the Ethiopian version than Indian, but with milk.

My entree was chicken curry on rice, a substantial dish and flavorful (face it, chicken and rice is one of the staple foods of the world. Outside the far, frozen North, what culture doesn't have some version of it?). Tam had Beef Rendang, beef and potatoes over noodles, in a nice sauce.

Unlike a lot of Indian food, the dishes were not at all "soupy," and seemed to be more fork/chopticks items rather than intended to be scooped up with flatbread.

Service was friendly and attentive.

Our opening course was misplaced (they were careful to ask if we had seafood allergies, had set it aside and about then, the appetizers showed up) and arrived after the meal: krupuk, fried prawn crackers, with peanut sauce. A remarkably good combination of tastes. (Tam promises to buy a big bag of them at the oriental grocery store; I'm hoping not-to-far-away Sakura Mart has them).

We will be back! --And not just for the shadow puppets, though they're pretty cool. 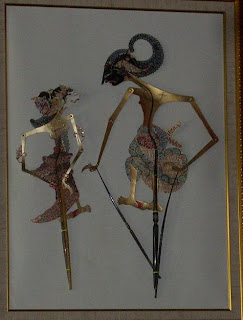 Late lunch, or early dinner?
LUNNER, from the old Denny's commercial...
(unless you have auto-correct, then it becomes lumber, and ruins the fun!)