I saw my first preying mantis of the season earlier in the week, a medium-sized one hunting annoying insects on the wall of my house. No time for photo but I wished it happy hunting. They'll give you a nice little nip if bothered but they do good work.

Last week, another katydid leafed her way onto the porch, possibly looking for an egg-laying spot: It's a cricket in a party dress!

--And with the good sense, I might add, to stay out of my basement. Would that her musical relatives did the same.

But the capper is this late-riser -- say you were a cicada; say you kept hitting the snooze alarm ("Plenty to do down here underground, lots of good grub, why go up?") until one day, one fine day the urge became overwhelming and by golly, you dropped whatever interesting bit of mucking about in the mud you were up to, dug up to the brilliant, blinding sunlight and then climbed and climbed madly up the very first climbable thing you came to, all kind of itchy with the urge to sprout wings and start yellin'. --Seemed kinda flimsy -- but it was too late, your skin was already startin' to stiffen up, so you grabbed and held on for all you were worth-- 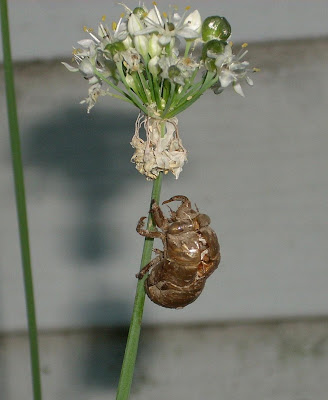 --Onto a chive stem. I hate to imagine how climbing out of its own skin went for the critter but I'm picturing a kind of Buster Keaton scene. (That image blows up pretty well, and is shrunk a bit from the original. Not bad for hand-held).
Posted by Roberta X at 9:09 PM

i absolutely love mantids. last year i bought egg cases and let them hatch...the more, the merrier, with the mosquito problem we have around here.

As a boy in Florida I always associated cast-off cicada skins with pine trees, I'd always find them about boy-height on the bark of a longleaf pine. Here in NC the cicadas are so loud in the woods around our house that I'll often snap and start yelling SHUT UP SHUT UP YOU BASTARDS at the noisy critters.

Laura, when I was a child, my parents offered my siblings and I a bounty (25 cents!) for every mantis egg case we found and brought back to the house.

...Between mantises and our two ducks, the garden was pretty much pest-free.

Bob, ever since I found out cicadas could turn off their own ears while singing, I've been a little impressed. ;)

I did not know that about mantids (the nipping part) having handled them extensively in my youth and never suffered one. I will say however, that I once did receive a "nip" from a green katydid. I recall being a bit shocked that a mild-mannered herbivore would and could deliver a "bite" if sufficiently annoyed.

Hah! You and I had completely different childhoods. I brought one home once and my mother lost her mind.

Mom had her priorities right 'way 'round about Nature -- she put it to work. Never very fond of chickens (and by extension, most domestic fowl) because she had to collect eggs from ol' broody hens when she was very, very young, she nevertheless made her peace with the ducks. (Two eggs a day helped!) I don't think she was nearly as fond of creepy-crawlies as I was, either; but she know which ones were a benefit to have around. (Toads, for example -- woe betide the child who bothered overmuch any toad who had taken up residence near the house, or who failed to sort out duck vs. toad issues promptly (the main issue being they look yummy to the ducks but most are too big to swallow...which the ducks are not quite able to figure out).

See, that's awesome. My mom was such a city girl that she considered "camping" what one did in a cabin that had AC, a TV, a kitchen, a bathroom, and a comfy bed. She was mortified when I decided to take up fishing as a summer pastime.