Mine, all mine -- except for the ammunition; that's from Tam's collection -- the Colt Police Positive Special: 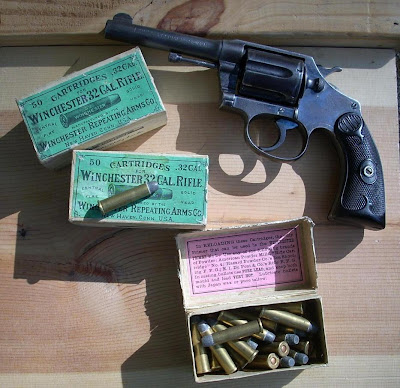 Alas, it needs a new ratchet, the widget at the center of the extractor star that the hand* reaches out and moves to advance the cylinder for the next shot: one or two teeth are iffy and a third doesn't talk to the hand at all. (It seems I need to clarify this. It's nothing subtle, not the width of the teeth or the slope, it's that three of them have been worn, filed or beaten too short. Failure mode is that the reaching hand moves out...and doesn't engage at all. Two of them will sometimes actually engage, the third never. How one beats up a part so rarely exposed is a question to which I have no answer.)

Mind you, when it does work, it's a fine reminder of why a 20th-Century Colt revolver is a thing of beauty and joy forever, just as smooth as can be. The .32-20 cartridge, originally in black powder and intended for a small-game rifle (rabbits and such), is pleasant to shoot and modern smokless loadings are hotter than .32 ACP, roughly equivalent to the amped-up .32 Magnum/.327 pistol loads.

There is a certain elegance to them, isn't there?

I'd always heard hand or advance hand. She is indeed elegant, T.J.

Might have to have it welded up and shaped for a fix. Doubt if that would be cheap though. :(

That is flat out beautiful.

Now you just need to locate someone with one of those CNC mini milling machines to make you a new ratchet/extractor. Or a talented amateur machinist with a manual mill.

Beautiful picture of the gun, Bobbi. The old-style ammo boxes are a great touch too. I keep having this visual image in my mind of adding an old leather holster and a fedora.

No fedora for me -- a dramatic wide-brimmed hat, something a villianess or heroine from The Spirit might wear!

I have has good luck wih Jack First for parts or maybe try http://grantcunningham.com/blog.html

Would the materials these new-fangled 3D printers deal in be robust enough?

"Would the materials these new-fangled 3D printers deal in be robust enough?"

Probably not, they usually use plastic of some flavor. A CAD drawing of the part could be converted to G-code and possibly run on a CNC mill. Or, machined the old fashioned way on manual machinery.

Roberta, you are young and purty STILL! Besides being one of the kewl kids....

Great find there Mizz Bobbie, I'd love to have one of those myself.I'm pretty sure it uses the same hand from a Detective Special, I'd give that a try.

That is indeed a wonderful example. And no, it does not go backwards. The Brand X stuff does!

If you have ever tried to fit those parts ( it isn't easy, I have one I go a few rounds with every few years, and it's about time to pull it out and battle it some more ) the idea of a little magic imp inside has some merit.

Incantations and excessive vulgar language doesn't seem to help either.

The idea of a production run of replacement ratchets has merit. The hand and the ratchet may be the same on an early Detective Special may be the same, but be aware the later D. S. were on an entirely different frame size.

Welding up and re-cutting the "teeth" on the ratchet may be a good way to go if you can find a competent tig welder to do it.

It seems the guns in the "Positive" family have more wear problems than most larger framed Colts.

The gunsmith who looked at it can do the weld-and-recut, no problem there; but it's fiddly work. Best to look for the part first.

If I ever make it up to one of your blog meet's I'll bring along my Colt Model 357 Magnum..circa 1955...New Service frame, 4" tube...they're known as pre-Python's because they don't have the snake's barrel...smoothest Colt DA/SA I've ever handled...

You also might want to check with Sarco, they usually have some esoteric parts in the back room.

The only reason to replace a Colt ratchet, short of major damage, is to correct a headspace or endshake problem. Unless you have one of those problems, you don't need to replace or modify the thing.

Unlike a S&W, a ratchet replacement is NOT a recommended way to fix timing. If you have a timing issue, you need to have the hand refit or replaced.

On occasion you'll find a ratchet where one or two lobes time slightly behind the others. The fix is to thin the offending lobes (exactly the opposite of what's needed on a S&W and what your guy is recommending) and then refit the hand to match.

If your gunsmith is talking about welding up ratchet lugs to fix the timing, it's extremely likely he doesn't know how to work on a Colt. Proceed with caution.

Grant, perhaps my post was unclear; let me try again: several steps 'round the cylinder FAIL TO ADVANCE. The ratchet is visibly chewed up. Looks to me like some moron decided to "fix" the timing using a coarse file...or a small hammer.

It was Shannon Jennings looked at it; I'm pretty sure the man knows how to work on a Colt.

I have a gun that looks pretty but is not useful. I want it to be useful. This is not a subtle failure: the ratchet is buggered up.

Fix is A) replacement or B) welding and a lot of fiddly handwork outside my skill set. Shannon was of the opinion B) was a laaaaast resort.

if you know of a C) magic fix because it is a Colt, solitic yourself some biz here -- but please don't be tellin' me my gunsmith's a fool until you know who he is. And don't assume I'm one, either. I fix things a lot tricksier than revolvers for a living and I have been doing it all my life. I can't do B, I have neither the experience nor the machine. I might be able to do A) and run the thing with some empty brass to see if it's close to right, then send it off for fine tuning.

"The only reason to replace a Colt ratchet, short of major damage..."

You could have stopped right there.

The ratchet looks like it's been used as a chew toy for a cyborg beaver.

Here, let me hold it closer to the modem and see if your diagnosis matches Shannon's. ;)