Heal The Hungry, Feed The Sick

Went and got myself shot for the flu -- and we'll see how well that works -- then decided since Tam was already gettin' a raw ordeal from Blogoradosis and I might yet be ordealt in myself, I had best come up with something healthful and nourishing, full of vegetables and wonderfulness. 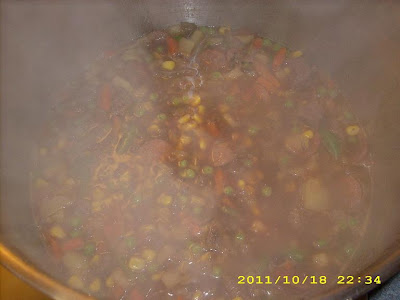 Pondered what I had in the freezer (high-grade vexed migtables) and the larder (an onion, a turnip and the possibility of beef stock), then hit the market in the way home. A couple of vine-ripe tomatoes (anyway, they're red-red, not pink-orange), a couple of potatoes, a mettwurst, a pound of very good beef, a little celery seed ('cos they had no snappy fresh celery and you do want a bit of it) and some just-in-case-I-was-wrong beef stock later, I was home, slaving over a hot stove:

Slice the mettwurst, toss in the pot with a kiss of olive oil to brown; dice the steak while that's goin', then add it with a little salt and pepper. Dice the onion and barely brown it in a small skillet, then add to the meat with a splash of red wine. Cook it down and add stock to cover. Dice the turnip,* saute, add to the pot. (Top up the stock as needed throughout the process; it should simmer, short of a boil).

The potatoes, I microwaved for a couple of minutes, diced and into the pot, which is starting to smell gooood. But wait! Those lovely tomatoes! They'll never cook down in time. What to do? --There's a cheat. It sounds nutty, but if you dice them and saute in a little olive oil, with a dash of salt and whatever else strikes your fancy, just cook them 'til they are nice and soft, they'll go right in like they've been simmered for hours. Maybe better.

Finally, bring it to a boil. Add a bit more stock and frozen mixed vegetable and follow package directions: bring back to a boil, reduce heat and simmer, covered, for n minutes. (In which n is a number greater than three but less than 15.) 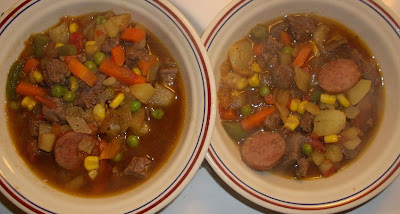 Let it set a bit, then serve and season to taste. Ahhhh! Tam's bowl was empty quickly but I think I was quicker.

Email ThisBlogThis!Share to TwitterShare to FacebookShare to Pinterest
Labels: Food, marvels of nature, marvels of science

Never been a big fan of the vegetable soups, preferring the noodle, rice, or barley types, but that does look yummisome.

It was delicious. I hoovered my bowl in no time flat and only decorum kept me from licking it clean. I think the Mettwurst was the secret ingredient that put it over the top.

Looks good! The Mettwurst looks like it should make up for it being a veggie soup.

I can only hope my lunch turned out as delicious as that looks!

Far be it from me to mess with somebodies cooking, but, for something a little different, cabbage with sliced Brussel Sprouts for a slighly different taste.

That should be ,"Replace the cabbage with Brussel sprouts"

Sorry for any confusion.

No mettwurst to be had in little town, I checked at lunch. I will try something in its place and let you know how it goes.

Speaking of vegetables, you know what actually has some pretty well-demonstrated antimicrobial activity, including antiviral? Garlic.

Speaking for ourselves, because we are too goddamned lazy to make and freeze our own stocks beforehand, we find throwing the bones into the soup means you get stock as you cook...

Dennis: I almost tried that with leftover Brussels sprouts a couple of weeks ago -- left them too long, darn it.

LabRat: I am not so much with cooking the chicken. I should try. (I'd as soon do a pork roast, which I haven't done in years -- pure yum, and if you roast veggies with it, you can make outstanding soup from the leftovers). As for garlic, that's almost essential for good soup; the only variable is quantity.

An old Italian guy once told me that the only thing you shouldn't put garlic in is ice cream; everything else tastes better with it.

Should you feel like taking a swing, most likely when you are not feeling like monitoring your white cell count, we use Corriher's approach. The animals all have very much looked forward to these occasions, as it invariably causes a case of "my cutting board runneth over", juiciness wise.

I like roast pork a lot, but I can never get quite as excited for it. Both foretell excellent soup base and sandwiches in my future, though.

Dang that looks good and seasonally appropriate! We've been doing the low & slow beans in the crockpot w/ the obligatory ham hock of deliciousness!