Another gun show, another Colt? So it seems to go for me; I'm the proud owner of another Colt Police Positive, this one from 1907 and chambered for what the Brits called .380-200. Colt just called it ".38 Colt New Police" and, by the most amazing coincidence, that's the same as .38 S&W. 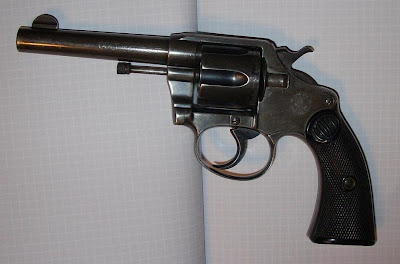 Saw lots of neat things, bought some very nice "This is MY house" T-shirts with a message about Indiana Supreme Court Justice Steven David and his upcoming confirmation vote (just say NO!), and, alas, found one of the cowboy shooter tables selling a stack of assorted segregation-era signs and placards. Hey, we should never forget we used have two sets of drinking fountains, washrooms, waiting rooms, seats at the movies -- Riverside Amusement Park, here in Indianapolis, had different days for people of different hues -- but remembering the dim past and using cutesy repros of the signs as decor in your den are two different things. You decorate however you want, but I'll form my own opinions, one of which is, I won't be buying anything from that table.

On from the gun show to the BlogMeet, and a fine time it was, too, with at least a dozen friends old and new; more later, possibly including photos. I wasn't able to stay as long as I would have liked, since I had to work that evening and in light of recent home and car misadventures, overtime is not to be sneered at.
Posted by Roberta X at 8:09 AM

And that's what the previous, 1:20 AM post was about, right? I can see that--the guy at the gun show should have thought a bit more about human decency.

I'd still advise you to stay out of East Bakersfield, and off of Cottonwood Road, but please tell me he wasn't selling many of the segregation signs.

There are vendors like that at Knob Creek too. It makes me happy to report that they all look bored when I pass by their stalls and tables.

I sure like to know where you Ladies keep getting that .38 S+W ammo. Rarer than Hen's teeth up here, and as expensive as a City Council Tax Increase.

Great looking revolver!
The really big gunshow here has the colossal one in early December. I'm hoping to go.
There is ALWAYS one table with nazi stuff, books, t-shirts, flags.
I give it a wide berth.
I've no problem with WWII memorabilia, including all participants. That's fine
But, an all nazi table creeps me out!

Was that the table with the big sign advertising full-length DVDs of "Song of the South"? I tried to give them a wide berth, so I didn't see what else they had.

Nice looking Colt. They are hard to find in any condition, and harder to find in that condition.

Down here in the Deeep South - if I were seventy miles further south I would be a soft shelled crab - the only people in the market for that stuff are middle aged and older "minorities."

One of my banker friends could pass for Herman Cain. He has a collection of old tin signs, complete with watermelons and front porches, that appear to be out of the Wilson years.

The years when more Ohioans and almost as many Hoosiers belonged to the Klan as the Democratic Party.

Ditto on feeling the same about the guys selling Nazi crap at fun shows.

I remember those guys from the last show, my first Indy 1500. Too bad. We don't see much of that stuff (I'm including the Nazi gear and the like) around here anymore; they seem to have run them off with the Beanie Baby people and the candle-makers sometime in the last five years.

Sorry I missed it. Guests left too late for me to get there, but we had fun.

Happy blogiversary by the way.

Really nice Colt Mizz Bobbie, beend looking for one that nice in 38 Special for a while myself. The thing to understand about hate merchant's is what they promote sound's good to like minded folk's. It's still wrong but history isn't very pretty when you look back with a critical eye.

I am of two minds about the signs. It's one thing to hear stories about how it was in the bad old days, it's another to run into an actual piece of it. I remember being shocked when I saw a colored/white sign somewhere, long ago, I don't remember where, but I remember the shock.