Saturday: The Guns Of Kokomo

Shootin' Buddy arrived bright & early (by my clock) and Turk Turon showed up shortly after, fortified with coffee. 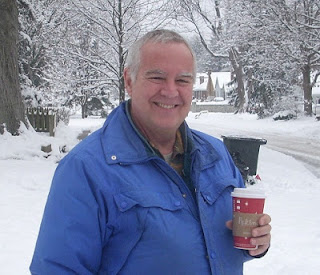 We enjoyed a delightful breakfast at Zest, then set off toward the Kokomo Gun Show in suitably seasonal weather, as can be seen behind Turk, and showed up to find a very full show.  No line but pretty steady traffic and a packed parking lot; it was noon when we arrived.

AR/AK-pattern rifles were available, at rather higher prices, and the only AR-15 magazines seen were GI-issue surplus 30-rounders for $60 each (!).  Plenty of askers, not so many takers; all the early buyers for modern sporting rifles of the sort politicians are once again talking about banning seem to have come and gone.

Tam found something that...  I'd better not steal her thunder, or in this case, top- and heart-breakingly near-perfect nickel-plating, real mother of pearl, in possibly-unfired condition and the original box...


Me, well, I wasn't really looking but I seem to have found anyway: my .22 revolver collection now has a Smith & Wesson, a K-22 Combat Masterpiece, at a good price (!) plus an inexpensive little wonder, a Savage Model 101 single-action, single-shot "cowboy gun" from the 1960s. 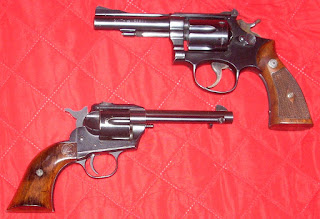 Model 101's loading arrangement is clever (the barrel moves with the "cylinder") and the ejector is an interesting twist on the usual methods. It has a highly-rebounding hammer, too, that can't contact the firing pin unless the trigger's all the way back.  (See photo: that's the at-rest position.)  The stocks are not wood but a very good plastic imitation; the supplier was making car dashboards with it when Savage found him.  It's pretty much a kid's gun, though intended for older, responsible "kids."  But when the younger children in the neighborhood where the designer lived heard he'd dreamed up a real "cowboy" sidearm just their size, they asked if please maybe he had some spare ones they could play Western Adventure with?  (This was, after all, during the heyday of the TV Western.) ...You and me, we'd just say, Not A Chance; designer Robert Hillberg decided it was better to make sure the kids had safe toys than to say no and wait to see what they might find on their own: he got Savage to run up a dozen "dummy" versions for the youngsters, not-actually-guns because the chamber was not drilled, so they could not possibly be loaded.  The dummy guns also turned out to be the very thing for Savage sales reps to carry for demonstration when making calls in highly-regulated areas like New York and Washington D.C.

Email ThisBlogThis!Share to TwitterShare to FacebookShare to Pinterest
Labels: the wonderfulness of you, things that go bang

The K-22 is a sweetheart to shoot. Mine has beautiful lockwork and a trigger so crisp it brings tears to your eyes. I have no doubt yours will be as good, or better.

And even of the Savage. One lived with me for a few years, aquired in a multi-gun swap and disposed of in the same way. I don't know if it "shot" as in shoot neat groups. It's job was to make cans bounce and dirt clods explode, and it did that well. I recall being impressed with the tight lockup and generally good quality for such a cheap gun.

MANY HAPPY RETURNS ON THE ACQUISITION
OF YOUR K-22 IM SURE IT IS THE START OF
A BEAUTIFUL RELATIONSHIP HAPPY TACK DRIVING AT 25 YARDS !

I remember the Savage SS very well. I never owned one, but Willard used to keep up with me shot for shot with my Woodsman, so it got the job done. Willard's 10 round strings were a bit slower than mine, though.

But one quibble. Inflation is a bit steeper than 7X in 45 years. Remember, while the tab for a box of cornflakes has gone up by pennies in the last four years, that "16" ounce box is now only 11 ounces. In a box with the same face size but two thirds the depth.

Congrats on the K-22. You got a really good deal. Around here, the things are 2-3x that for whatever reason.

Seems like every other K-22 in the world has a six-inch barrel.

I bought a K-22 years ago, to shoot as a plinker. The guy I bought it from had used it in Bullseye competition; this was in 1968, when everyone was switching to auto-loaders. Of course, it's a 6" barrel job. Don't remember what I paid for it, probably $100.00 or so.

They're a little more, now -- though Tam tells me I did not overpay.

I'm unfamiliar with the Model 101, so I'll refrain from comment on that, except to say it's neat.

The K-22: well, I'm really happy for you. I think the K-22s are wonderful guns; the Combat Masterpiece was one I coveted for a long time, and I was happy to finally get one.

But mine was a lot more than yours was: close to $700, without box and papers. (That does include shipping and my FFL's transfer fee.)

Yeah. I didn't go, but what I heard from folks at the Tanner show out here was that there was no shortage of magazines, because the vendors had jacked the prices up too far, and buyers were walking away.

I apologize, Roberta. I realized after I posted my comment that I'd misread what you paid. I blame stress and the vertical integration of the broiler industry.

I am still just a little green: used pre-Model 18s just do not show up used in this part of the world at all.

I was surprised to see it, and very happy with the price. Managed to pick it up for 12% below a not-out-of-line asking price.