Snippets From A Road Trip 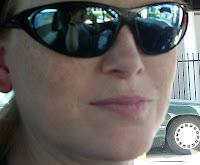 "You better point that thing somewhere else if you want it to make a round trip!" Y'know, some folks just plain don't like having amateur snapshots taken -- or was it the Elbow Of Doom? (See reflection)

Tam and I took a roadtrip Saturday. Sadly, I did not take a pic of the very nice '50s-vintage Allstate scooter we saw at a small-town car dealership, but take my word, this "Sears Vespa" was nice -- all bright red with cream trim, a single-seater with the old-style cargo rack.

Before we'd even left Indy, the freeway took us past an impressive brick building, sort of Federal revival, a bit unkempt and obviously empty. Across the facade, signage: THE NICE LAWYERS. A smaller sign in the unmown lawn advertised For Lease. Correlation might not always be causation but one does wonder.

Farther down the road, "James Joyce Truck Sales." Sure, the prices are good but the contact's a thousand pages long and some of the language is a bit off-kilter....

Then there was the church with a line of drive-up spaces way at the back of the grounds, each one with a drive-in movie speaker ready on on its post, just the thing for late arrivals. Do they have roller-skating ushers for Communion Sundays, do you think?

In contrast, in our destination city, a business along the highway made me snicker so loud I about had to pull over: Cox's Smoker's Supplies. I've heard the boys at work call each other that, I think, but only when they are very, very angry.

On the way back, a billboard: artsy black-and-white photo of a young woman and her shadow; she's slender, her shadow's some months along. Text: "Pregnant? Need Help?" And an unreadable telephone number; I'm hoping it wasn't that of a lonely Lothario, but one never knows.

You see some interesting vehicles on the interstate, not all of them under their own power. In addition to the nice custom, there were more motorcycles than I have ever seen. Welcome to the new world of $4.00+ a gallon gas.

Closer to Indy, a pair of ginormous full-color, full-motion, bright in sunlight video billboards, the first I've seen. Maybe they're old hat where you live but for me, it was a real "living in the future" moment. Paging Ridley Scott!

Heard on the radio: Marcy Playground, like Jim Morrisson in an especially ill mood. Plus INXS and Edie Brickell and some other interesting stuff. I need to listen to the radio either less or more. Just now I'm not sure which.
Posted by Roberta X at 12:10 AM

Is that a reflection of an arm holding a fly rod there in Tam's lenses?

Hey, sometime when you're in the mood for a little longer road trip, the Bycicle museum is in New Bremen OH, has a very few powered bikes and a lot of interesting history. A nice day trip, and maybe 120 miles. SHort enough to drive in and out in a day.