I finally made Colcannon. Oh, yowza! 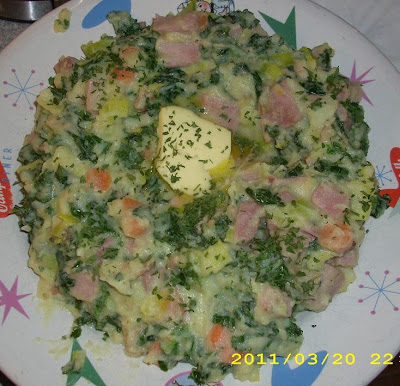 This is the version with kale instead of cabbage, plus leeks and ham and a little carrot. Hot and filling; I ate an entire bowl full!

It really ought to have pepper and a pinch of mace but I subbed a bit more nutmeg for the mace. Plus plenty of good Irish butter.

Even the cats wanted a taste. Rannie took a direct approach: 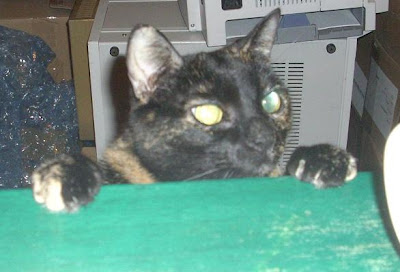 Huck tried to convince me to let him sit in my lap, from where he could stage an assault on the soup plate of tasty goodness. 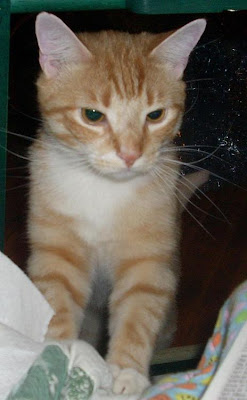 Sorry, kids. Kibble and catnip instead?

I highly recommend colcannon. It's easy to make, though a bit pan-intensive. I fried a couple strips of bacon and used the aft and a little high-temp oil to saute the kale (and leeks and carrots) and used pre-cooked ham chunks, simmered in water; when the potatoes were done, I poured the water off the ham and replaced it with the potato water. So there's two saucepans and the wok. I microwaved the milk to heat it up -- the trick is to do it in short jolts so you don't boil it.

Add butter, stir them up with a knife and mash the potatoes in the pan they were cooked in, adding hot milk a little at a time (I leave the skin on, which calls for a good sharp knife; vary to suit yourself. A big dinner fork is ideal for the actual mashing), use a flexible spatula to scrape mashed taters into the wok atop the veggies. Mix and add the ham and the bacon (if you didn't eat it already), stir some more and serve out into bowls with a pat of butter and some parsley. Enjoy!
Posted by Roberta X at 11:16 PM

The Black Family of Ireland does a wonderful song in praise of colcannon.
Lyrics here: http://www.frances-black.net/disco/songs/19.htm