How Does It Work?

Well, for starters, the "skyhook" is only there -- along with a row of yellow-tape flags -- to help the winch operator see what his tag line is doing. ETA: WRONG! The Chief Rigger informs me it's called the "weasel," weighs about a hundred pounds and helps keep the basket riding freely on the tagline. My scale is way off, by the way; the weasel rides up and down about 60' away from the base of the tower, while the (only middle-sized) tree is maybe 400' away. In operation, there are two fairly sharp bends in the tagline: at the weasel and at the basket.

The load line rigging is more complex than I drew; it actually runs through yet another sheave fixed to the top of the basket and back to the tower, where it is attached just below the lower of the top two sheaves.

As for the rest, why, here's a thousand words worth: 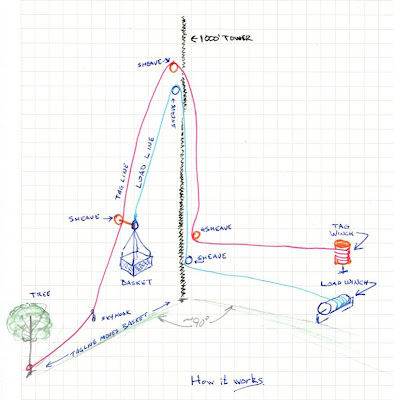 I have taken some liberties in simplifying, especially the load line and hoist, but that's the basic idea. The four sheaves (it's what most people call a pulley*) closest to the tower are, of course, strapped to it.

The more tension on the tagline, the farther the basket gets from the tower, especially when it's low -- which is when it needs to be able to move farthest away. It doesn't need a lot of travel on that axis and this gives it more than enough to avoid various terrestrial-relay dishes, TV receiving antennas and the tall fence around the tower base. Interestingly, there's very little force on the tree end of the tag line; the weight of the line and weasel do a lot of the work and all it sees is the horizontal force needs to displace the load: not much.

Semi-relatedly, it appears some places omit all the hardware:

(used by wenches for hoisting)

Wenches need three inch cables to hoist up the beer? Try glasses instead of mugs.

Thanks for the illustration. That isn't something I ever thought about before. Now I have another entry in my "interesting but mostly useless (to me at the moment) file of information." This is why I like to hang out with techies. They always come up with interesting things to talk about. As Lazarus Long said "....Specialization is for insects."

One hopes -- well, this one does, anyway -- that the guylines opposing the forces are sturdy and well anchored, and that the field-expedient tree is moderately tenacious and doesn't suffer from hidden rot.

The tallest tower I ever climbed was 300' and had nothing on it but the old Motorola four-way vertical business band antenna at the top. It was that job that convinced me I had no future as a tower climber.

You drew a freehand sketch! Variegated for clarity - well done!

I must be missing something.

Are the dimensions about right in the drawing or does the tagline run more parallel to the tower?

Seems you would want the load forces running down the tower as much as possible. In which case, why use a tag line at all? I must be missing something.

This is just conjecture on my part, but if you're hoisting something up a 1000' tower you don't want it banging into the tower or anything installed on it, or the load line wrapped around the tower. The tag line will help limit sway and give some control over the distance between the load and the tower, and you can point it in a direction to keep the load away from guy wires.

Conclusion: The drawing was informative but the "wench" aside was hilarious. I showed it to the flight control computer folks in Connecticut today and they all thought it was great!

Recommendation: Come on, geeks, put down the slide rules, head for the bar and enjoy the "wenching". It's Friday!!!

As an elevator technician, I feel compelled to mention to all it may concern that the word "sheave" is not pronounced like "sheeve". It's pronounced like "shiv". It always drives me crazy when someone who obviously knows stuff about rigging, calls it a "sheeve". OCD moment over.

Ed: Wenches are available for hoisting anywhere. Even Marketing drones can find them. But a talk on the dynamics of high tower work is rare, and to be savored.

Ed: it takes all sorts. Otherwise we'd have no basis for trade.

In regards to your post in comments yesterday...
Be at ease, in no way does it appear we were disappointed by today's lesson. I for one was most pleased at learning something new.

But I still get the feeling I'm missing the final piece of the puzzle.

(Gotta love the WV: bribonce (Bribe Once). Do those bribed once ever stay bribed?)

Danno, it's about precise control. The top sheaves are about 500' up for this job, while the total side-to-side travel available to the basket at the bottom is 50' and tapers off to zero as it approaches the top.

At the very bottom, they need to land the basket next to the heavy piles of heavy material; time spent on the ground trudging tower parts from Point A to Point B is time wasted. From about 6' through 200', the tower (like most) is fairly bristling with all manner of little (fragile) antennea. You don't want to hit those. (Trust me, you really don't. It's expensive). And at some point on the way up, the basket is likely to pass one's fellow riggers, who are even easier to damage.

On this kind of hoisting, a tagline is essential. The way this crew rigged it is cleverer than most, and reduces the ground crew for routine operations to a single winch operator, far enough away from the tower to mind the big picture, with the back and forth motion running left and right from where he sits.

A directly-tagged load (just trailing a long cable) takes two or three men on the ground and risks loss of control if the breeze picks up. The tag man (men) have to allow the line to slip through their fingers up and down while maintaining enough stress on it to steer the load and their entire area of operations has to be kept clear of anything that might trip them or get snagged on the cable.

I did a job where we had to remove about 8 or 10 small aluminum open dish antennae (we called them "lawnchairs", since they looked like examples of uncomfortable retro aluminum porch furniture). They were about 30" in diameter and weighed less than 5 lbs each.

The tower owner (not our boss - we contracted this gig) wanted the antennae down ASAP, since he had to have a commercial transmitter offline while we were on the tower.

We took a look with binoculars (the dishes were at around 130' and the guy wires were at about 90'), and told him we could have them down in twenty minutes. He was astounded.

I climbed to the gear, and my partner climbed to the tie-in for the guys. I had a 50' piece of nylon rope, and he had a 200' piece of paracord. Our boss stood on the ground by the guy anchor, and I removed each antenna, dropped it to him on the short rope, whereupon he would clip it onto the guy and send it down, controlling the speed with the paracord. By "controlling", I mean "keeping the friction from melting through the aluminum carabiner". That tower was SINGING from the antennae zipping down the guy wires.

Got the job done in 25 minutes, including climbing time. Total time with the FM transmitter offline: 8 minutes. :)

Other people can have antennas on theirs if they prefer. Breaded and deep-fried, probably.

Leave the antennae for critters with spare legs and crunchy shells.

The comms will be handled by the antennas.

Is there a monkey to chase the weasel?

Never mind, probably the junior guy (!) on the work crew.

If you want to see psuedo-doc on working on one of these and have netflix.
http://movies.netflix.com/WiMovie/World_s_Toughest_Fixes/70152644?trkid=2361637
World Toughest Fixes season 1 episode 7

The host guy is annoying but seem relatively competent.

Bobbi -- is that why your avatar picture cuts off just above the eyebrows? :-)

I am the Foreman of the tower crew in the conversation here. (Told you I would check this stuff out, Roberta)

Dave H said it best in his first comment, in case there is any debate.

By the way, Eriko brought up the series "World's toughest fixes" done by the NatGeo channel. They did two episodes on tower crews...both for a company I worked for and all of them fellas I know personally.

The two episodes were called "2,000 foot tower", and "San Antonio Flag Pole", IF I recall correctly.

How very kewl to have you show up, Jake! Thanks for commenting; you've got a lot of fans you never even knew about.