(No, not the Bacon Spam -- that will be a breakfast). I made Hearty Beef Stew X: 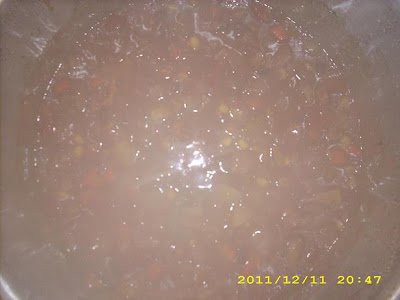 When it's cooking, it is a mystery to the camera!

But it will warm you, inside and out. Start with altogether too much stew meat; I used a pound and a half of beef, snipped it up smaller with kitchen shears, right into a bag of cornstarch with salt and some other spices that looked interesting (aw, how wrong can you go?). Meanwhile, some olive oil and a couple of pats of Irish butter (gotta get it used up, right?) were warming up in a big stewpot. Coated the beef pieces a little at a time, shook off the excess and dropped them in the pot to brown. It smelled good already!

While the beef was browning, I chopped up half an onion, a few carrot and celery sticks (total cheat, the grocer's sells a mix of the latter two for snacking at about the same unit cost as buying either on the hoof -- and with less waste). Tossed the onion in once the beef was well underway, added the other two when the onion started to cook. When they seemed happy, I put in sliced mushrooms, and by then it was time to deglaze a little with some leftover Chianti.

Things were coming right along, so I diced a potato and nuked it for a couple of minutes (more cheating!) while the pot cooked, added the taters and poured beef stock into the pot to cover, put the lid on and went away for twenty minutes.

On my return, I added one of those little cans of green chilies (trust me) and a cab of diced tomatoes; gave that ten minutes to get acquainted, added some succotash (corn, some lima beans -- grow up, they're pretty good) and black beans and gave it another ten-- Turned off the heat, let it set a spell while I rustled up bowls, plates, drinks and silverware. Ladle into bowls and it's ambrosia, with just enough heat to get your attention: 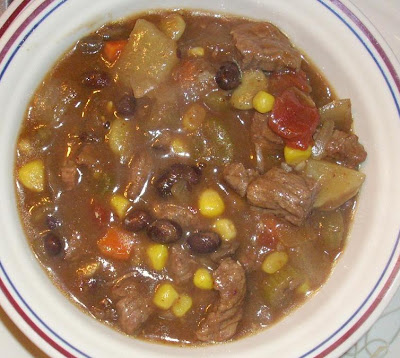 Best with whatever-starch on the side -- good crusty bread, or thick corn chips, that sort of thing.

Serves, h'mm, probably 11 to 17. I put a big container of leftover stew in the fridge and I will probably heat it up for the tower crew tomorrow.
Posted by Roberta X at 4:38 AM

a few carrot and celery sticks (total cheat, the grocer's sells a mix of the latter two
Ha! You want a cheat? I go to Trader Joe's and buy their ready-made mirapoix!

I refuse to grow up and eat lima beans.

PS - Try some rutabega in place of potato some time. Yum!

Well, eat around them, then, don't-call-me-Sir. Think of it as evasion practice. ;)

With all due respect to MSgtB, that's one of the things that told me I was finally an adult: I ate lima beans and liked 'em. (Realizing that I was ready to be Dad was the big one, though.)

Looks almost exactly like mine, and damn near the same ingredients. I like throwing in a bit of barley, also, and sometimes a bit of okra if I have any around.

Canned chile! The horrors and deprivation y'all have to put up with out there in the MidEast.

I'll bring you some of the good stuff. Ironically for all my faux shock, it will be powdered.