I'd started it before the Mysterious Scrabbling, worked on a little of it during, and added the last bits after: a great big pot of Random-Bean Soup, with plenty of ham.  Blackeyed peas, baby limas, some kind of "organic bean mix" that had black beans, pinto beans and kidney beans, plus lentils and some corn and green peas.

Started with the (frozen) blackeyed peas and ham, added (frozen) limas, then the canned and dehydrated (corn, peas) stuff much later.  Sauteed a big beefsteak tomato, cubed, and threw that in, then gave half an onion and several celery stalks the same treatment.  Simmer until the tomato has vanished (!) and serve with more diced onion and celery plus some good bread -- no time to make cornbread with the squirrel-in-flue issue, so I toasted good seedless rye bread instead. 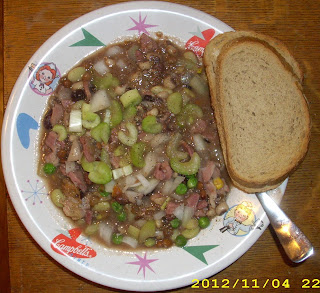 Just the thing for a chilly, too-busy evening.  (And to add to the enjoyment, I rode my penny-farthing to the market to buy the ingredients I didn't have.  Clocked over two miles on it today.)
Posted by Roberta X at 9:14 PM