Christmas morning, I had a surprise.

As the day approached, Tam had been chortling over her gift choice with more than her usual vigor; this should've clued me but I was largely oblivious other than making up my mind that whatever it was, I was going to treat it as the Greatest. Gift. Evar.

Oh, me of little faith.

Comes the day, Tam traipsed downstairs from her attic lair carrying what appeared to be -- and was -- an old-fashioned wooden "lap desk" or secretary -- a very handy item, once used on tabletops as often as laps. 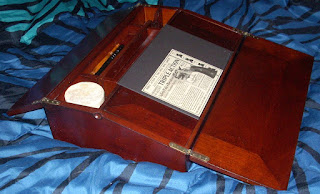 That was kewl indeed and I was impressed.

Inside, under the front flap, that was an ad for a classic top-break revolver and a certificate attesting that it was an original, clipped right right out of a 1909 back number of Argosy (a fiction pulp back then).  Kewler!

The front flap merely completes the slant of the top of the gadget down to the surface it sits on; there's another lid under it, which forms the upper portion of the writing surface. "Open it the rest of the way," Tam told me.

I lifted up the lid and there was....this: 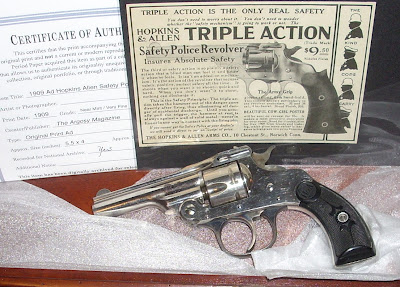 Yep.  It's a nicely-nickled Hopkins & Allen top-break in .32 S&W* from 1909, just like one in the ad except for the stocks!  Very nearly pristine; it may have been fired once or twice and it appears to have been kept well-cleaned and oiled but its the newest over-hundred-year-old gun I've ever seen.

Email ThisBlogThis!Share to TwitterShare to FacebookShare to Pinterest
Labels: marvels of history, the wonderfulness of you, things that go bang

I am envious, and soundly applaud Tamara's good taste and appropriate generosity.

I would be grinning for days if I was to receive a gift so well thought out.

"If you cannot get the Safety Police at your local dealer's, we will send it direct to you on receipt of price."

The past is truly Another Country...

A fabulous gift, with a great deal of love behind it. While living with someone can create friction and the occasional raw spot, it's obvious that the proximity has also lent itself to greater insight into what type of gift truly touches your heart. I can see myself getting the lapdesk and the revolver, but the certified authentic period advertisement wouldn't have occurred to me.

Tam sounds like a great friend, and you two are lucky to have developed a relationship that clicks as well as you have.

Wow. *imagines an early 20th-century Roberta packing the H&A for her trip to Europe and the Holy Land*

Don't suppose you can add a pic of the lap desk to the post, could you?

Bob: Could and have!

...I think you may find a late 19th/early 20th person quite similar to myself (and even more so to my mom's sisters) in the "Amelia Peabody" Egyptologist-mysteries by Elizabeth Peters.

Phillip: sometimes we drive one another batty; regular, separate vacations are a must. But generally, Tam and I get along -- any we'd drive any two other people right over the edge!

@Roberta: I read some of the early Amelia Peabody novels. Guess they didn't click with me, as I didn't bother continuing the series. I was thinking more along the lines of Freya Stark and Gertrude Bell.

And long and loud was the squeeing thereof, I should imagine.

MY COMPLEMENTS TO TAM AND YOU!
THE PEN MY BE MIGHTIER THAN THE SWORD
(WRITING DESK ) BUT THERE ARE TIMES THAT
A SCRIBES QUILL COULD USE A BIT OF BACK UP ! USE BOTH IN GOOD HEALTH WRITE A PULITZER ! AND GET THE .32S IN THE X RING!

A gift true to the real spirit of the season. Merry Christmas!

I've spent many a happy hour with Peabody and Emerson (the Greatest Eygptologist of this or any other age) and some scotch.
The entire gift package looks wonderful.
Time to clean up my H&R .32S&W and hit the range.

That's an awesome set of gifts, and I hope it brightened up what sounds like an otherwise un-fun time of year for you.

A wonderful Christmas gift. Hats off to you both.

Ah, yes. From the days when a woman could ventilate an EvilDoer and still be a lady to her fingertips.

To quote Leslie Chartreis writting The Saint..." My heart went pit-a-pat. Then it went pat-a-pit. Then it did a double back flip and broke it's bloody neck." Merry Christmas to you both....

Well, that is truly sweet. Back when I had the makings of a wood shop, a Jefferson lap desk was on my list of stuff to build. Guess I'll just have to be envious.