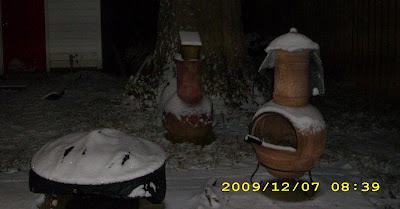 Tam got the first snow photo posted; then again, she still treats the stuff as a delightful novelty. One of us doesn't commute. Guess who!

(Those aren't chimeneii, they're open-air atomic reactors. As far as you know. Actually, they are planters-to-be, or so I am told).
Posted by Roberta X at 7:41 AM

By the time I hatched my "No, don't throw them out! We can plant ivy in them!" plan, playing in the dirt season was pretty much over for me.

Tam: Yep. But they didn't know that.

Nathan, it is now!