Herself set out for K-town noonish; I left on an extended shopping expedition right before. 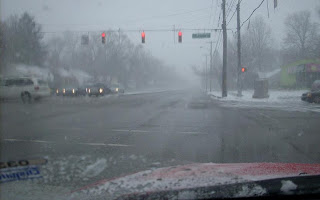 [If city streets are like this, how bad is the freeway? --Bad, very bad.]

I was at my last stop, ready to check out, when my phone rang. Tam had just slalomed the BMW rollerskate through a 12-car pile-up, riding the antilock brakes in near-blizzard conditions and come to a stop unscathed.

...Unscathed and next to a Honda leaking gasoline, which is where her first call ended.

I made a few calls of my own and learned the highway had been shut down, due to the white-out Tam described when she called back: "Visibility got worse and worse; suddenly, there was a guy standing in the road waving his arms, and shapes beyond," which turned out to be 5 or 6 cars accordioned into one another on each side of the road and off into the ditches.

She's fine now; the State Police showed up and worked quick triage, sending her (sport-o-car and all) to a truck stop a couple miles down the road. She was going to take awhile to investigate road conditions and catch her breath before deciding her next move. (On the telephone, Tam-seriously-rattled sounds just like Tam-as-usual but even the steel-nerved have to slow back down).

It's been white-out and sunshine alternating at Roseholme. Makes me glad I picked up hot chocolate mix, eggs and bacon. 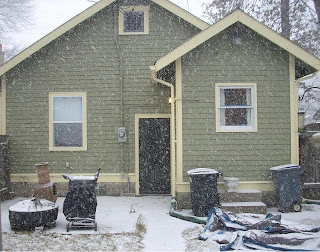 Update (1): She gathered her intel and her coolth, set out down the road again...and traffic ground to a standstill ten miles on. As of about 2:00 p.m., Our Miss Tam is stranded in a pack of 16-wheelers and hasn't quite got 35 miles away in two hours. It's IFR.

In theory, if she keeps going South, things have got to improve; in practice, that's tricky to do if nobody else on the freeway is minded to travel.

Update (2): About ten after 6, she's in Lexington, Kentucky. There's snow on the ground and on the streets; there is no salt or sand on the streets and it is rush hour. It was a very short call.

Near white-out conditions from Columbus, Indiana to a few miles North of the Ohio River had traffic c-r-a-w-l-i-n-g. Doesn't sound like it's much faster in Lexingtion. I take back what I said about conditions getting better as she gets further South. What sort of weather-witchery have they been up to in Dixie? Global what-ening?

Update (3): 7:30 p.m. finds our young heroine stymied by black ice -- and even more so by the way people drive on it -- some 200 miles outside her destination. She's found a motel. Sounds like a darned good idea to me.
Posted by Roberta X at 6:12 PM

Email ThisBlogThis!Share to TwitterShare to FacebookShare to Pinterest
Labels: marvels of nature, things that should not go bang, to not be a fly on that wall

Please let us know if she needs anything. I've got a warm house, welcoming family, and 4WD to effect a rescue. Of course, we're outside Dayton, so not really on the path from Indy to K-ville. Willing to make the run if necessary though.

According to the interweb radar, she should be good once she gets south of Seymour and closer to Louisville. Ten'na-see looks clear...

My friend E. was on her way in from out of state to IN for a couple of days and called me a couple hours ago near Lexington, KY to tell me she wouldn't be here tonight. She was stuck in traffic in a big snow and was going to pull off at the nearest exit, her hubby already calling ahead and looking for rooms. Glad Tam got through it relatively unscathed. Tell her howdy and to be safe.

I flew out of Indy this morning. When I boarded the plane the snow was just drifting down. Half an hour later we took off in a blizzard.

Airline brilliance! Or perhaps Air Traffic. I guess it beats bumping into another plane.

How was the weather at the other end?

Nice paint job! It even looks good in the snow.

You won't want to hear I'm sitting in the back yard in sunny Phoenix in the 70s typing this reply. [Pause] There, that's better. I had to move the chair to a shady spot. [Insert gnashing of teeth sound at a great distance.] See? Told ya.

Yeah, I spent the day going from Buffalo to Indy.

Got out of the Queen city before the lake effect hit, but got bands of it in Erie and some whiteout in Cleveland.

Then before and after Columbus had some bands of snow.

Saw a mess of pulled over cars, between the snow and wind a bad spot could pop right up on you.

Yesterday we drove to the coast, but today is colder and gray. I couldn't live in that, tried but it just didn't work

Hopefully by tomorrow AM, someone somewhere down south will have figured out how to mount a front blade on a gravel truck and maybe even put the salt spreader on...naw, they don't do that south of the Ohio river, do they?

The motel was the best choice...

Glad she pulled off to the side and got a hotel. Driving in those conditions is nerve-racking to say the least. Tell Tam to stay safe!!

(and thanks for the updates)

Black ice and a torque happy Jerry soda can...

Yeah... a hotel room is a darn fine idea.

Glad she's OK. For once, the Kentucky folks didn't crank up the salt machine at the first warning of potential wintertime precip. Louisville isn't too bad on the surface roads, but I stayed off the interstates today on purpose.

As for the other drivers, let's just say that Rand McNally ought to just put a "Here there be morons" banner across the Louisville/Lexington area on their maps.