A plinker and a mystery!

You can blame the NRA for the first; the most recent issue of American Rifleman featured an Iver Johnson Supershot Sealed 8 .22 revolver.

When I found one -- Model 844 -- at the Tri-State Gun Show yesterday (hey -- they're open today, too!), at a price within negotiating distance of reality, could you blame me for being tempted? 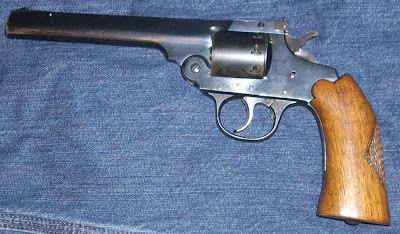 It is an Iver Johnson, with all that implies, but this example is in decent shape.

Best of all? Like the rest of its kin, it's a top-break! (FWIW: Iver Johnson also made bicycles and briefly sponsored Indianapolis-born champion rider Marshall "Major" Taylor.)

...Another fellow at the show's got a long-barreled .22 Colt Police Positive that I really like; priced a bit high, though, and the sights are tiny, old-fashioned, sharp-of-eye-only: it would mostly be a "safe queen" and I have too many of those.

Next up, an antique-shop mystery: 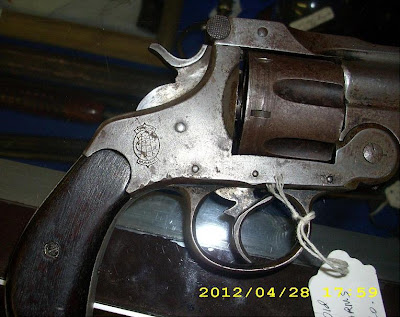 Another top-break, with a very S&W-type latch and somewhat British hammer and trigger; I thought maybe it was an older S&W or an H&R (there's a small H&R in an obsolete caliber right next to it). Nope, the topstrap is marked "The Old Firearms Company" and there's a complex logo on the side. 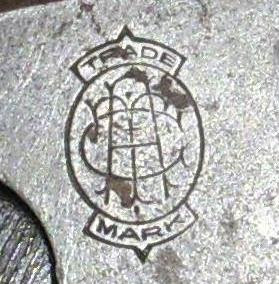 Some island-gunsmith special? It looks too good for that, but I'm darned if I know what it is; even the chambering seems odd, something short and .45ish. Presumably not a "gun" as the Feds define them, but what else it is remains to be discovered. --By someone else.

"After a slight bit of searching I came up with:
ATC is tradename and abbreviation for Armas de Trico y Caza , South America

And a similar piece in 8mm centerfire Adalet."

Check his link: it's a match!

That is a nice IJ, and maybe firearms wasn't their best venture, but check out the 1951 Iver Johnson motorcycle. It is really nice, I'd gladly trade a few vintage model 92 and 94 Winchesters for one of those.

OOPS that was supposed to be 1915 Iver-Johnson

It's a beauty either way! Pity about the intake manifold -- I wonder if a clever type could gin up a high-flow replacement. (Then it would really outrun its own brakes; and Wikipedia says they're hen's-toothy already, so maybe not a good idea).

While my limit is a cuppa, I would wager my limit that your mystery revolver is one of the jillion and some odd house brands turned out by Hopkins and Allen, likely between the Spanish American and the "Big War."

Brands ranged the gamut from Acme to Zenith, and quality ranged from some of the finest revolvers ever made to utterly dreadful.

That one looks to be of reasonable quality. Likely in .44 Bull Dog, S&W, Russian, or something else in that size that escapes my immediate recall.

I hope that I.J. followed you home; a friend had one years ago, was a decent shooter,as I recall. They're just neet little guns! I wish some body was building a compact, top-break revolver in .357 or .45acp, would be a nice packin' piece. 6 rnd. capacity, 7 for a .357.... JohninMd(help)

So envious of your Iver-Johnson!

I have a similarly made Harrington and Richardson top break, which I like a good deal. It has been well kept and has a similar "Grip extension" to the one in the photograph, making it actually possible to use. Fun little lightweight revolver, with a DA trigger pull that is like tightening the lugnuts on a Land Rover.

After a slight bit of searching I came up with:
ATC is tradename and abbreviation for
Armas de Trico y Caza , South America

and a similar piece in 8mm centerfire
Adalet.

Wow! Excellent research. I think you have solved the mystery.

What an eccentric front sight assembly that Iver Johnson has! Is that a retaining screw for the blade?

I think it's an elevation adjustment -- notice the pin muzzlewards of it?