(WGTZ, a "rimshot" FM signal into Dayon from Eaton, OH, at one time used the title phrase as their top-of-the-hour ID).

So, driven by the redoubtable Turk Turon in a twenny-frikkin'-ten, howlin' red Camaro* (and yeah, heads turn), he and I went to the Hamvention.

...We walked the entire flea market; this is the rough equivalent to walking the parking lots of a good-sized mall. Up and down every lane. All of them filled with ....stuff! Ham gear. More ham gear. optics. Ham gear. Telegraph keys. A 12-ga blank cannon. Jewelry made from radio parts. Ham gear from the 1940s (I wanna Radio Manufacturing Engineers model 46 receiver!). Ham gear from The Future. Books. Tom Perera, Gil S., Doug Hauff. Ham gear. A Mecograph bug, working. An air pistol. And so on...all day!

Pictures to follow. I returned with:
1. Earrings made from vacuum tubes. 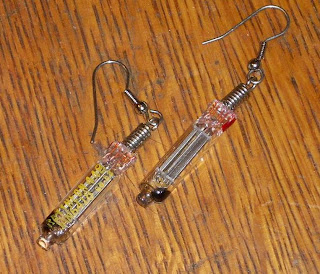 2. A vari-speed device for a LaHiff-designed Vibroplex bug -- $2 worth of brass, $20 worth of know-how and $7 of machining time. Vibroplex stopped making them...but there was another fellow there who hasn't!
3. Variable Condensers
4. A Begali semiautomatic telegraph key of unique design, the "Intrepid" and a handshake from Pietro Begali with it. (Think "high-end 1911;" think "Ferrari." Now combine them. It's like that. Ooooo) .
5. A nifty little benchtop meter -- I was lookin' it over and the seller said, "You should have that." Free. "'Cos you know what it is."
6. A replacement 1011B telephone lineman's buttset. (Scroll down for pix) (Which I just realized is still in the Camaro with Turk. I hope). This is a good find 'cos my old one is kind of dead and they have a medium-high "unknown sproing" factor. And yes, it is a rude-sounding name, short for "butt-in set," a test telephone that can be patched in to check phone lines. This is an older type.
7. Sunburn. Also free. Treated with white vinegar, which sounds painful but isn't and usually works. When will I learn to take sunscreen to the Dayton Hamvention?

Glad you had fun, m'dear. And yes, please remember the sunscreen.

I at least know what some of that stuff is.

OOOoooooo that sounds like FUN in a major key!

All in one day? Hard core geek, that is. I salute you and brother Turk!

Wow. I always wanted to be a ham. (And then I got into blogging instead, bdump bump.) Sounds like great fun was had by all.

Like Nathan, I listened to Hams when I had my receiver, but never got into the "getting a Ham license" part. My loss for sure.

I remember, in the late 1970's, the only people who were allowed "vanity" plates were Hams, who had their call signs for their plate number.

The legend of the Ham was that in a disaster, they were the ones who still had communication with the outside world, relaying damage reports and radioing for assistance. I always thought that was boucous awesome where after a hurricane leveled a place, some old hardtack Ham would string a line and start tapping out a signal for help, hoping for a live receiver on the other end.

These days -- and even in the old days -- it's not just the electronics skill set to get back into communication with the rest of the world; every day, there are "traffic nets" on shortwave through UHF, passing trivial messages to keep in practice and doing drills for the voluntary peacetime organization ARES and its offical wartime counterpart, RACES. The tradition of emergency service is nearly as old as the hobby; one of the first applications was helping pass train orders when telegraph lines were down, which is a life-and-death matter on a single-track line with trains moving in both directions! (ARRL's old "land SOS" signal,QRR -- later QRRR -- commemorates this service).

Other preparedness aspects include everything from "Field Day," a weekend in summer when huge numbers of hams set up in field conditions, using emergency power, to a simple standardization of 12 DC power connectors. (Highly recommended, btw; I've been workin' on my employer to adopt the system for our gear, too).

These days, voice and digital modes predominate in both message-handling and other forms of emergency service; but radiotelegraph code is still used for some of it.