Sometimes I am such a pushover--! Tam and I went to shoot today and stopped by Beech Grove Firearms along the way, to look at my Type 99 Arisaka (on consignment, Imperial chrysanthemum intact, ring 'em up) and she had something to ship out...

...And they had this in the case, priced to move: 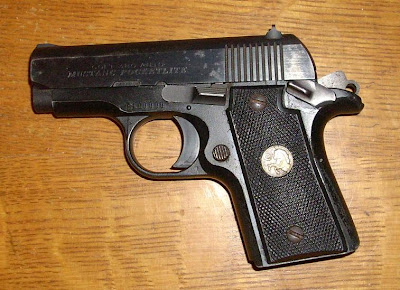 5.5" long, 3.75" high and not quite an inch wide at the widest. It's a Colt Mustang Pocketlite, the single-action mate to my DAO Colt Pony Pocketlite. Slide stop pin felt okay, no wobble; field-stripped it and the locking lugs looked okay. So there it was. These little guns don't show up all that often any more and they're usually overpriced. This one isn't.

Bought it, took it to the range, did the used-gun drill: already inspected, so one round in the magazine, fire; two, bang-misfeed; two more, bang-bang; three and so on 'til I was shootin' a full magazine. One misfeed, one oops-I-bumped-the-slide-stop. Shoots to point of aim and it is controllable one-handed in my dominant hand. A nice, tiny .380.

It'll want serious cleaning and I'd like to replace the plastic guide rod with honest steel.

Now I've got to find the Colt Government Model .380, which is a scaled-down 1911 in nearly every respect -- and would essentially complete the basic set.

Email ThisBlogThis!Share to TwitterShare to FacebookShare to Pinterest
Labels: the wonderfulness of life, things that go bang

Nice! I owned one once. Good little carry pistol.

Good catch. If you're looking for magazines, send me an email. I have 2. One still in the packaging.

What do you mean by the phrase "the serial number was spoofed"? I've never heard the phrase before.
Thanks for expanding my gun knowledge.

Hmmm, how much you be axing for the Arisaka?

Stretch: you can read a number on the frame of the gun in the published photograph, but it's not the number on it. In fact, except for two letters, it's all ones!

Published photos of my Sistema Colt have likewise been edited to be all zeros.

AD: I'll have to do a little math, but what I paid for it plus their commission is the bottom line. It'll come in a little over $220, I think

Wait! ...Tam didn't realize what I paid for the Arisaka and she has had right of first refusal all along. Negotiations are in progress.

You would think Colt would make these again, they would sell like hotcakes.

If they sold like hotcakes, Colt wouldn't have quit making them in the first place... ;)

I think the problem is that when they did make them, it was difficult in most places to get a permit to conceal carry one. Now it is much easier to get the permit (I got mine last year) and a lot of guns I would not have looked twice at before are now very interesting to me.

They stopped making their .380 guns due to the lawsuit from Kahr. Rep at Colt booth at Shotshow said they won that suit. Hmm, guess "winning" needs to be defined.
Roberta: get the barrel feed ramp done the same as a .45, and it will feed anything.

My Colt Pony already feeds anything. I will see how this one does.

One of my rules: Thou Shalt Not Touch The Feed Ramp (etc.) With Anything Stronger Than Solvent. Though I have used Flitz on really dirty ones.

Colt was having serious QC issues when they were turning these pocket pistols out; I don't know that they resolved them before production stopped. With an alloy frame, they are "carry lots/shoot rarely" guns: the slide stop pin will eat the frame eventually. I think steel framed versions exist and would be nice for range use.

"They stopped making their .380 guns due to the lawsuit from Kahr."

I knew that Colt stopped making the Pocket Nine, with its off-center feed ramp, due to the ramp design infringing on Kahr's patents, but they'd been making the Gov't and Mustang .380s since Justin Moon was 15 years old; unless they had a time machine in Hartford, I don't think they stole any of his patents for the .380. ;)

I picked up one of the leftover SMA titanium guide rods from Mac Scott for mine a few years back.

I'm hoping Sig's little knockoff will reinvigorate interest, at least to the point of getting more holster options.

Tam, you're right about the time frame. I was thinking about Colt trying to turn the .380's into 9mm. They decided not to market it because it didn't last long enough. Think it only had a 5000 rnd life expectancy with standard ammo. So, they ended up with the Pocket 9 when they got done. Guess they should have kept it SA, instead of DAO.
Roberta, my PocketLite choked on various hollowpoints when stock. I bought it for my sister, so I wanted to ensure it would handle anything she might stuff into it. Same with a .380 AMT for another sister. She was sharing her husbands identical CCW gun, loaded with ball.(sigh) Only good thing about that little AMT was the grip safety. Think it weighed about the same as my Lightweight Officers 45acp. The Mustang was a much better gun.