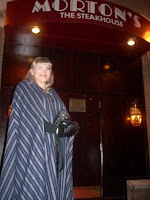 Dinner at Morton's was fantabulous, as ever! Turk Turon was once again my charming companion for the evening and we had a grand time.

...I'm finding that a champagne cocktail before, a wee bit o'Drambuie (warmed over a tumbler of hot water) after and a flute of bubbly to toast the New Year are almost too much! On the other hand, a "small" single-cut filet mignon (huge!), salad, asparagus and hot-chocolate cake do ameliorate the effects.

Morton's has retained its speakeasy ambiance, complete with one of the most skilled and professional bartenders to be found in these parts; you just know this guy is ever alert to the possibility of havin' to push the hidden button that conceal all evidence of Demon Rum...or not, but it's a fine excuse to post Turk's photograph of a champagne cocktail. The glass has been dipped in cinnamon sugar! 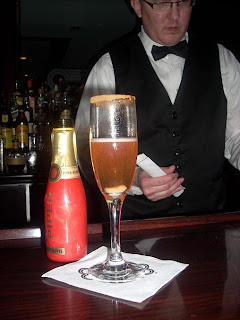 There's a sugar cube fizzing away madly in the bottom of the glass, tormented by two drops of peach bitters; but it all turns out nicely after a few Secret Ingredients are added and soothed by the addition of champagne.

That Turk guy gets around.

New Jovian Thunderbolt: I've heard that he has an SR-71 Blackbird fly him into Indy. But that's just rumor. He's a mysterious sort of guy.

Well ... I tell you. All that food and drink would have gone to waste if I had been supremely fortunate to sit across from you New Year's Eve. I wouldn't have moved, totally entranced. You are smashing, Bobbie X ... and I know there's several hundredweight of us just gobsmacked.

Oh ... I use orange bitters for my champagne cocktails.