...Look, if ijits are fixin' to kill a cop and then blow up attendees at his funeral, that's a Problem, a Crime; but the kind of bigtime coverage I am seein' over a poorly-baked scheme that was nipped in the bud and is bein' widely condemned even by other camo-clad campers is a bit olber* the top -- unless you've seen The Modern Reporter's Eye Chart: 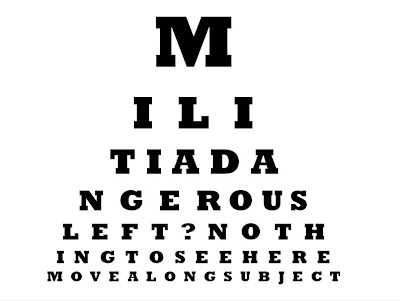 Clears that right up, dunnit?

(Lawnorder take on the whole thing from Sebastian, here. Put me down in the "you do not blow up people who aren't initiating force against you" column. Ya wanna be the good guy? Then you don't get to throw the first punch and you most certainly do not target innocents -- and there is a level on which J. Average LEO, expecting only ordinary crime, misjudgment and malfeasance, is as innocent as a lamb).
_____________________________
* Similar to "over the top" but now with 99% more frothing-at-the-mouthness!
Posted by Roberta X at 9:27 PM

Email ThisBlogThis!Share to TwitterShare to FacebookShare to Pinterest
Labels: marvels of politics, The Kinetoscope

It's a right nice kick-off for the Bloomberg-Obama coalition to start the Hue and Cry for 'sensible gun control".

the campaign has had lots of time to get it's ducks in a row, and the O apparently feels that he has political capitol to spend.

Not an unexpected opening salvo, and certainly they had fools ripe for the plucking. Wonder if a gov't informant and inst---unh---source will show up?

An eerily similar plot to destroy a police station in Riverside, CA was foiled last week. The perps were gang members trying to murder members of an anti-gang task force. The press reaction was a raised eyebrow and an observation that boys will be boys. I guess you have to be a white male, Christian to be taken seriously as a felon these days.

"It's a right nice kick-off for the Bloomberg-Obama coalition to start the Hue and Cry for 'sensible gun control"."

If that was its intent, and I'm not saying it wasn't, it seems to be malfing badly.

More likely, this was a sideshow to divert attention from the Health Care fracas and the new unemployment woes.

These gomers need to be taken off the street if what the Feds are alleging is true but I suspect this was an ongoing investigation that the US Attorney was told put on the front burner. The timing smells.

So, let me state up front that I'm not defending these guys or their plot, I'm simply raising a practical / philosophical question. This is something that has come up in debate with people I know who have a more conventional view of the government than I do.

Where does the buck stop, and at what remove?

Perl: Are they initiatin' force against you now? --None of this "who will be initiating..." stuff, not unless they are stacked up outside your door, armed to the teethies.

Which stinks, really, if you like quick fixes; it means unless they are in the act of actual physical force or fraud, y'gotta fight 'em with words and votes and lawsuits. But there's way less blood to mop up, survivors to comfort and bystanders to apologize to that way.

Ok, so you're going with a very very direct interpretation of "initiating force". i.e.: the only people in the scenario initiating force are the cops who are kicking in your door right now. I can understand that point of view, although I'm not sure I can totally agree with it.

Yes, clearly the gentlemen with the shiny boots can be definitively said to be initiating force. But it really seems like the guy that gave the order for them to go to your house in the first place bears some culpability in the "initiating" department as well.

Though, I suppose, at root, that's a somewhat collectivist viewpoint. The individuals doing the door kicking have the option of just saying no, at which point, there's no real violence that's been initiated.

*argues both sides of everything*

The problem with so many of these philosophical viewpoints is that their thought experiments always seem to start with the phrase "Assuming a completely frictionless environment..."

Tam: You have to start somewhere. *shrug*

Hey, Reverend, the congregation's that way.

I'm just becoming a lot more like Prof. de la Paz and less like El Neil as I age.

You know, "arguing both sides of everything." ;)

In re the below: Jackboot Joe at my door is the only initiator of force within my reach. His commanding ossifers? Their bosses? Who'm'I, Patton? Churchill? It's not a war and I am not a soldier; the systemic problems must be resolved by different means.

"...the only people in the scenario initiating force are the cops who are kicking in your door right now. I can understand that point of view, although I'm not sure I can totally agree with it.

Yes, clearly the gentlemen with the shiny boots can be definitively said to be initiating force. But it really seems like the guy that gave the order for them to go to your house in the first place bears some culpability in the "initiating" department as well."

...Also, the only aggressor I can identify for certain (without mindreading) is the one clearly aggressing in my direct observation.

Is that high standard of proof? Yes. Yes it is. There aren't any do-overs.