Portrait Of A Day

We'll start with this: 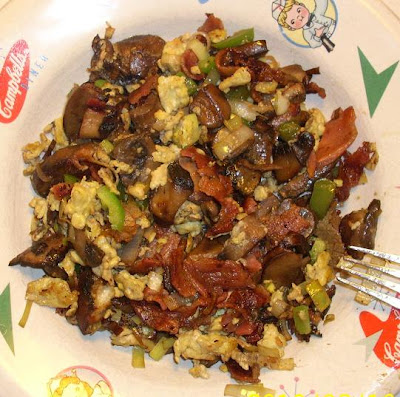 It doesn't look like much and I'm sure it's not good for you -- but who cares? A little thick-sliced bacon, a bit more panchetta*, nearly two slices of Italian spiced deli beef, mushrooms, a leek, an Anaheim pepper and three eggs; cook per my Secret Recipe and enjoy!

After that (and a shower), I turned to my scooter. I'd had The Flying Percolator perking yesterday but the season's first rain, a gentle shower just enough to bring all the Winter's yeeech to the surface, does not constitute proper conditions for the season's first ride. Today, unexpected sunshine and the need for a shopping trip added up to an excuse to ride. Rode out, gassed up (had to wait on a gosh-awful commotion of emergency vehicles) and headed onwards to Tarrrr-dzhey. Or towards; approaching the next major intersection a mile up the road, traffic slowed to a crawl and flashing lights and cross-parked police cars told where the ambulances had been going. I ducked through back streets and picked up the next road to my destination, a looong block East -- and still found a car on its roof in someone's front yard not very far back towards the blocked intersection. Don't know any further details, though it was the sort of thing that impels one to mutter a prayer just-in-case and served as a reminder not to take operating a tiny two-wheeler too lightly.

...Shopping served as a reminder of just how much cargo that two-wheeler will safely carry: a month's supply of paper toweling plus various odds and ends, for example. You have to be careful of sail area, though.

Returned home in a good mood to hear, as I put up my helmet and gloves, "You'd better get back here." Tam was in the computer room with my cats (who live there). Tommy, the oldest, was walking in circles and seemed weak on his left side, unsteady on his feet and a little distressed. He turned 20 last October.

I called the vet and begged an appointment soonest, thinking, sadly, it was only two days ago that he snuck into my bedroom and found a nice patch of sunlight to nap in. The vet couldn't find time for my elderly cat 'til an hour on; after getting him calmed down and comfortably settled, we bicycled out for a quick newspaper run (for the smallest cat) -- she doesn't like the free papers but she'll use 'em. Tommy was no worse on our return, for a relief.

Off to the vet, then. There's blood out for testing and she looked him over thoroughly. So far, it doesn't look like a stroke and his blood sugar is okay. They gave him subcutaneous fluids (old cat, usually a little dehydrated) and have promised to call with results in the morning.

And there's a day. I've been keeping an eye on him. He wasn't much interested in dinner tonight and complained loudly when he got off my desk (his bed) and found he couldn't get back up. Dozing now, poor old guy, and purring softly to himself when petted.

Dang it. Hoping for good karma for Tommy.

You do make the most delicious-looking...melanges.

Sometimes cats get 'strokes' in their hindquarters (close to the pelvis) which leads to non- or partially functioning rear legs. Here's hoping he just had a part of him fall asleep, and it wasn't a stroke.

Give Tommy a pet for me, and some scritches behind the ears too, if he likes those.

My best thoughts for Tommy.

My old cat, Callie, a 14 year old Calico, sends her best wishes to Tommy along with mine. We hope he will be fine.

Best wishes for Tommy....and strength for you.

My thoughts are with Tommy and you. Take care!

Thinkin' good thoughts about a pussycat...

Haven't seen anything about Tommy so here's hoping things are good. Emmy and Lou (their not-with-us brother's name was Harris) send their best as well.

Very best wishes for Tommy. He sounds like a fine old boy.

Prayers and best wishes for Tommy!

Best wishes for Tommy and you.

Just keep petting him as long as you can, best wishes to all 4 of you,