Off to Eagle Creek Park Pistol Range, open again for the season! (There was some question earlier this year if 'twould open on time -- there were fiddlin' details to be worked out.* Which have been.)

The place was jumping -- near full when I arrived. By the time I left, they'd opened the West bay and had it half occupied.

Tam and Shootin' Buddy were already there, with any number of nice toys; aside from the usual .22 trainers and carry-type sidearms, SB had a Colt revolver in .22 WRF, over a hundred years old! Shot like brand-new.

I had my Ruger Mk. II, a High-Standard 9-shooter revolver and the Star DK and Colt .32-20 seen earlier.

The High-Standard is a 6"-barrel R-101 "Sentinel" made in 1956 or '57 and is, in many ways, a revolver twin to the Ruger Mk. II: easy to shoot, reliable, fun and plenty accurate. They show up at shows around here reasonably often and (IMO) it's a gun worth owning. The center of this target has been well-chewed by both: 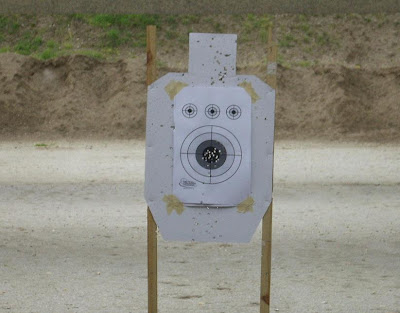 The string of larger holes, climbing up from the bottom of the paper? Me, getting used to the Star DK. (My shots were, at least and in one case barely, on the paper) The tiny .380 proved to be amazingly docile; I had suspected it might be both jumpy and hammer-bitey. It isn't. Felt recoil is mild. I'd rather pocket carry a DAO but the DK is a gem. Control placement and function is just like a 1911 -- or any of Star's other SA semi-autos. (And On Secomd Thought -- an IWB holster carrying one of these, or the little Colt Mustang and Pony models of about the same size, would not be out of the question.)

The .32-20 Colt was a different kind of surprise. It's got problems. A dozen rounds in, with SB running it for a cylinder-ful, the cylinder (and cylinder latch) started sticking. Possibly merely accumulated gunk, but it's on the sidelines until I can look at it -- and if it takes anything more than careful opening up and cleaning, it'll probably go off to the 'smith, as the sproing factor is very high with DA revolvers.

All in all, a good day at the range. I can still shoot -- I won't win any prizes but I can put 'em where they need put.

† Actually "RICK'S CΛFE BOΛTYΛRD," for no reason I can find. Do they realize how difficult that is to pronounce?
Posted by Roberta X at 2:45 PM

A cheater for getting gunk out of handguns. Get yourself a can of brake cleaner the kind with TCE not the newer "green" stuff. Take the grips off and using the straw, hose the heck out of everything you can poke the straw into or around. Drain and blow it out with some canned air, then oil it up with lubricant of choice. 5-10 drops into the action. a drop or 2 on any moving surfaces, and dry fire a bit. Make sure you wipe down the exterior with oil/rust preventative because the brake cleaner will really strip all the old oils off leaving bare metal.

Don't breathe the brake cleaner, is nasty stuff. It is definitely an outside job.

Nicely done! I look forward to shooting with you and I will bring my Colt 32-20 too.

I teach defensive shooting and it is a bit different than target shooting. I agree with you that all of the shots on the target are acceptable.

I was kicking myself for not asking Tam if you were OK. Sorry I missed you; I will bring more ammo next time so I can stay longer :)

Nice target. 8^) Beware of brake cleaner + plastic; they don't get along. Occasionally, I use Berkible 2+2 Gun Cutter; typically Hoppes #9 will suffice.

That should be "Gum cutter".

Did the "Yak" have a nice rounded tail, or a relatively rectangular tail?

The ejector rod on Mrs. Drang's Rossi .357 occasionally works itself loose, and jams the cylinder. Don't suppose it could be something so simple?
(Probably not, if by "sticking" you mean "not rotating", as opposed to "not opening.".)

I would place a trip to Fogo on betting that the little Colt did not have more than 100 rounds through it if that until yesterday. I think it lived in a sock drawer from 1902 to 2011.

"I would place a trip to Fogo on betting that the little Colt did not have more than 100 rounds through it if that until yesterday."

Actually, that little Star DK should be a lot easier to Shoot because it's NOT made of Tupperware (Mass is Good sometimes), nor does it have a 15 TON Trigger pull to keep the Lawyers happy. I'd scrounge some spare Mags, find a good self-defense load in that caliber that it likes, and you should be set for the Summer. For Holsters, give Dennis at Dragonleatherworks.com a buzz. I can Highly recommend his "FUGLY" IWB. If he doesn't have a Stock Holster for a particular piece, he's more than Happy to work with you. And his Prices won't set you back a Tank of Gas, either!