Couldn't Do Anything, So We Went To The Zoo

Tam and I went to the zoo today, only barely ahead of the rain -- it began to pour down as we approached the Oceans building, last stop on our trip before exiting though the Gift Shop.

The very first creature encountered could be heard barking a long way off -- one of the graceful pinnipeds, cruising around the enclosure with the others and raising a ruckus. 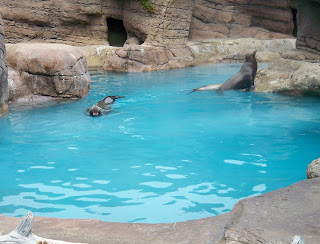 Why?  We're not sure, but we think he's a tattletale: 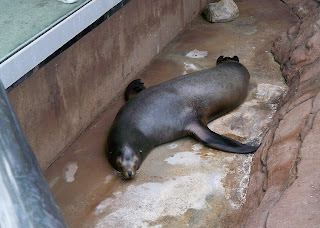 The very largest of the brood (it's an assortment of rescued seals and sea lions) had snuck over the edge and was napping on the warm concrete of the dry moat between them and the visitors!  Tam and I asked the ticket-booth agent about this.  "Oh, he does that all the time.  It's all right."  --it's not like anyone is going to lift him back in like a kitten into a basket.  That's a whole lot of seal.

Fruit bats, as it turns out, just love salad.  They love it enough to fight over it. 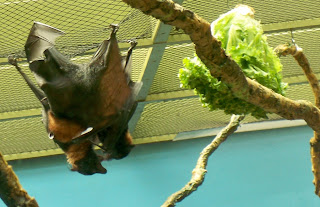 The result looks like cats fencing with umbrellas!  --Or perhaps small dogs.  They have small-dog faces but move more like cats.
(Not shown: smaller, straw-colored bats, all but one of whom had collected into a tight group and were being hectored by the remaining bat.  I checked for insignia or a clerical collar; didn't see any.) 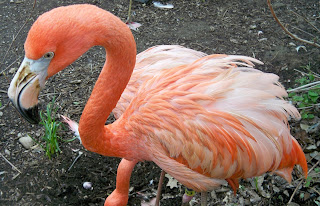 Even the flamingos have their doubts.

Cheetahs: so fast, they can show up twice in the same photo!

Tigers, the big ones, are getting sleepy.... 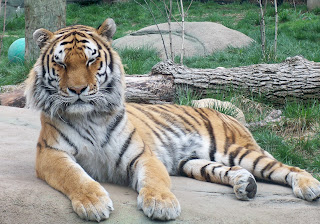 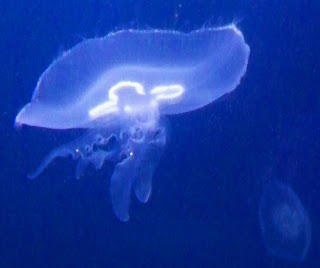 Yowza!  That one is about the size of my head!

This is going to confuse the fruit bats if they see it.

The seahorse: a pipefish that grows on trees? 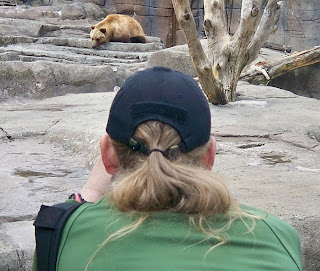 In the Deserts dome, there are strategically placed heat lamps. Tortises like to bask under them. Lizards find there's nothing quite like a warm tortise on a chilly afternoon.  The terrapin had no comment: 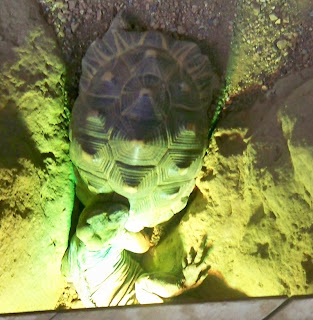 En route to the Indianapolis Zoo from downtown, we passed the Old Trails building, one of the few examples of Native American Deco architecture, ever: 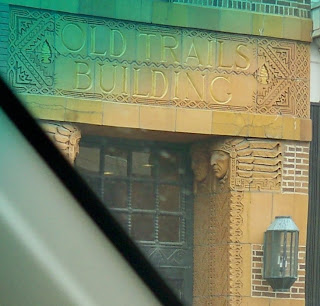 I'm told the faces are modeled on actual (as they said at the time) Indians.  PC or not, it's an architectural treasure.

Email ThisBlogThis!Share to TwitterShare to FacebookShare to Pinterest
Labels: marvels of history, marvels of nature

I haven't been to the zoo in forever. Of course, I enjoyed it immensely when I was a young'un. I did recently go to Colorado's Ocean Journey, which would've been more fun absent the weekend crowd. Otters are quite amusing.

I still have a Peacock feather from oh 30+ years ago from the State zoo here. I need to go back!

I have got to get back to the Indy zoo.

It's been....*takes shoe off to keep counting* lots of years. I remember going through the desert dome and laughing as one little lizard cleavage bombed some chick. She freaked and the lizard scurried back up the wall to wait for another victim.

Rewind 15 years, and that little guy could be me... And sure enough, I've got fish tanks sitting to my left and am looking for Marine Biology/Sciences grad schools.

When we were stationed in San Diego we had membership in the zoo and would go quite often to the Zoo and the Wild Animal Park. One of the few things I miss about living there.

"ducks on stilts". Good one. Reminds me of years ago we took out oldest to the zoo. When he saw the flamingoes he exclaimed "look, ducks in color".
That should tell you how long ago it was, we still had a b&w TV.
Terry
Fla.