Another Day At The Artifice 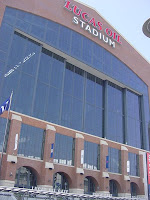 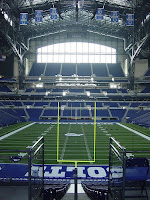 Scootered into work earlier than usual this morning, thinking about how good it was that Gustav had weakened as it hit land, and that, perhaps, the very successful evacuation of New Orleans showed that possibly, just possibly we might not be the dumbest primates on the planet.

Little did I know I'd be crossin' paths with some refugees before the morning was over. See, i was in early for a spot of hands-on learning with a select group of my peers (including the Fer-de-Lance, who brung a camera; hoping to get I now have 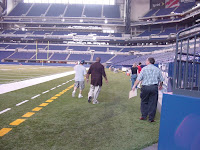 copies of his pix): a techhie-tour of the new Lucas Oil Stadium (design by Albert Speer & Assoc? I dunno, the thing is inhumanly vast). We do that in the Big Giant Media Biz, 'cos the place is too big to just go in and start guessin'. In fact, it's so big, we "wired" most of it with fiber-optic cable: glass is a lot less lossy than copper. 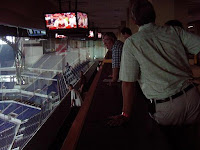 It took three hours. And a lot of walkin'. (Tip: the press boxes are way better than suites if you came to watch the game and want air-conditioning. Good luck gettin' in).


Learning where our connection points are down on the field, we saw what, from a distance, looked like a joke come to life: a garden tractor cruising the artificial turf in a regular pattern, for all the world as if it was being mowed! Nope, they were, for want of a better word, combing the field, with a device that looks like a section of chain-link fence pulled by the tractor. Modern artificial turf feels exactly like your lawn, if you have a very nice lawn. Still -- lawnmower. Fake turf. TILT! 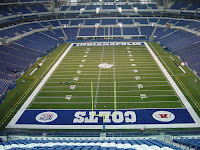 We went through the locker rooms and saw the maze of secure tunnels for players, coaches and others that make the media access points nearby a kind of ironic gesture. At this point, us special folk (oh, you betcha) get to walk right through the locker rooms: Home, my what nice and very rugged lockers,* the hall, the Visitor-- Eeek! It's fulla uniforms and stuff, and guys puttin' up towels and-- The six of us ducked back out and looked: at the door, a fleur-de-lis and the words, "NEW ORLEANS SAINTS."
Refugees. 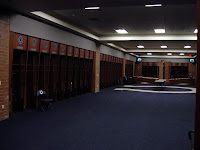 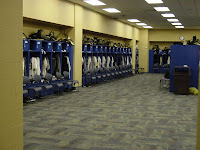 See, their place wasn't exactly gonna be the very best place to practice for awhile, and Indy had this brand-new stadium, soooo.... Which we knew but nobody had put it together. Alas for me, no burly players fresh from the shower or nothin'. Damme. 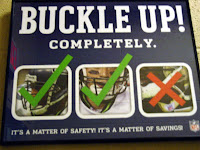 The maze of entry and exit points is interesting and layered; I'm told on game days, every person entering gets patted down. Isn't that special?

The inside seems even more vast than the outside, a Circus of which Rome could have only dreamed. Fascinating and a bit depressing.
You can't quite see my house from the outside balconies but that's mostly 'cos there's buildings in the way. (We're one floor up, on the roof). 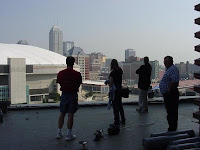 Rest of my day was anticlimactic, the usual sort of things, hot sunny day -- until go-home time, when it poured rain, bucketsful. I rolled my scooter over to a garage on out lot and waited. And waited. And... Finally, it slowed up and I squished home, mindful of my speed and wary of get-home-itis, arriving to discover Tam was doing up salmon and asparagus!

Email ThisBlogThis!Share to TwitterShare to FacebookShare to Pinterest
Labels: marvels of politics, marvels of science

Is it finished yet? When I was there for the Motorola walk through I didn't think they'd meet the deadline.

It's done enough They were still pittin' togther some lockers in the Home locker room yesterday and small crews running punchlists are all over the place. (One item on their list? Fixing our fiber-optic links to a few locations). But the building's functional, all the seats in, playing surface down, amenities in place and workin'!

Does this mean we'll see you in town agian soon?

The lower-level inside areas are a celphone and radio dead zone, so plan on walking out to the field a lot for calls.