Food Of The Us

The Big Digital Tomorrow project at Skunk Works North Campus having come to an end -- give or take 40 feet of 4-1/16" coax and some meter-calibration quibbles -- I came home as Dawn was heaving herself over the horizon (decently out of sight, my oh my how some folks do get hung over), climbed into bed as rapidly as I could swap jeans and T-shirt for a nightgown and promptly crashed viciously beneath quilt, blanket and crisp cotton sheets, to emerge blinking and disoriented eight hours later, give or take. (As in, "Give me my glasses and I'll take a look at the clock! --Gah, now I know how Dawn felt.")

I don't care if reality is real or merely a totally convincing copy, after this past week and the overnight of spinning plates of eggs on poles[1] that finished it, I needed some foooood. Hearty stuff. Stuff that's not all that good fer ya.
This stuff: 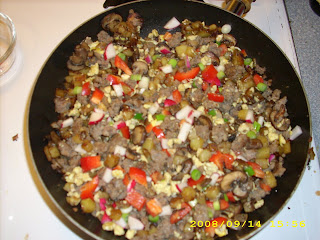 What we have here is sausage, diced Yukon Gold taters[2], sliced "Baby Bella" 'shrooms and scrambled eggs, with diced green onions, radishes and red bell peppers added once the burner is off. It needs just a touch more and we end up with this: Adorned and garnished by freshly-snipped dill and some grated cheese. Sprinkle with hot sauce of your choice (or none at all -- there's already a dash of Worcestershire in the eggs and some Cajun seasoning on the potatoes) and it's about as good as anyone could ask, at least if they're asking me! Plenty of it, too. My first meal in nearly 24 hours.

Of course, if you're going to eat that well, it calls for dessert. I had a Lindor "Ultimate Dark"

chocolate ball, the inside filled with near-liquid dark, dark chocolate, while Tam, never one to miss a wonderment nor keep it to herself, shared a taste of her "Bacon Bar:" applewood bacon, alderwood smoked salt and extraordinary milk chocolate. Not an inexpensive treat but genuinely worth it, richly layered and complex, almost floral without being cloying. You can keep your wine and fine cigars, this stuff whups 'em all, hands-down.

All this while watching "Collateral," a gem of a film I'd rank with "Gattaca" and "Blade Runner." Some directors take over your eyes -- Micheal Mann is one of 'em.
_____________________
1. At one point I had two stardrive transmitters running on the same channel using different transmission modes and the signal from one that currently produces income, er, I mean interstellar drive was havin' to boil a ginourmously big vat of heat-conducting oil before it could head up the tower. A vat, mind you, nearly sealed and which we had learned a couple of days before was not, in fact, quite large enough for the heat load it needed to bear. Had fans blowin' on it an' lighted joss sticks to Hephaestus an' kept walkin' by an' layin' hands on it, or nearly, anyway, since it was skin-searing hot. But hey, no pressure. Literally, which is a good thing: I look bad covered in boiling oil.
2. Good but an experiment and I think Idaho bakers fry up better; I'll have to try other varieties, too. Yukon Golds are totally superior mashed.
Posted by Roberta X at 9:22 PM

Email ThisBlogThis!Share to TwitterShare to FacebookShare to Pinterest
Labels: Food, things that should not go bang

How many Watts are putting into the antenna for HD?

Into the antenna? For now, it will be a bit under 2200 W, for 15.1 kW ERP; but things are supposedly not yet done gettng sorted out and it could change. In terms of average power, it is a little more than 10% of the present analog power level for the same coverage area.

The UHF DTV we run now, on the other hand, runs more average power out than the analog VHF peak power. And that's the story of UHF: it takes more oomph to get where you're going. A lot more.

YUM!
I'm not going to have a delicious meal like that until we hit Dalandzadgad!

Try the New Potatoes with the reddish purple skin and cook them with the skin on. They ought to hold together very well cooked.

Cool (watch out for the boiling oil)! But what does one of them that stardrive transmitters look like? Send me a photo, I could not find one on the internet. I don't think I'm allowed to know what they look like.

That's FOOD!
My little Philips HDTV antenna on the bamboo pole in the living-room keeps dropping Ch.7's signal and we have to go and reload the box - it figures it's a UHF matter...
The screecher-kid is out in the back yard again making weird loud noises...I wonder if its ever gonna learn to talk?