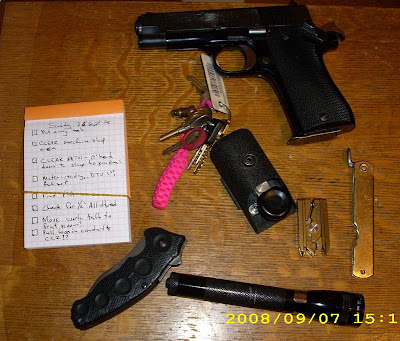 ...This is between teaching Tam a little Morse Code and a trip to the garage for the backup cat water fountain and right after making notes for work. So we have a tiny Rhodia gridpad (3.3 x 4.7"), Star BKM, house keys, French-made SA military radiotelegraph key, Swiss+Tech pocketool, Japanese carpenter's knife, Mini Maglight (with LED conversion, note the endcap switch) and my everyday Kershaw knife. (Ain't innernational trade wunnerful?)

Let's see, it says I should find a story in the pile and I kind of did that, asks after the smallest item which is obvious, wants to know what's the most embarrassing item and that turns out to be my house keys since Miss Observant here had to see the photo to suss out something was m-i-s-s-i-n-g and asks if there's anything illegal in it. Not as far as I know, though an LEO who was sufficiently motivated could probably look official askance at my assisted-opening Kershaw: Indiana's got a doofy switchblade law. That knife isn't one but legitimate doubt could exist.

Just you wait 'til I do one for my purse!

What's in your pockets?

PS: Hadn't noticed the skull bead is gone from the pink lanyard on my keys. Oh, foo. Wonder if the little dude is in my purse in two parts? Update: No. Double foo!

Thanks to Ride Fast And Shoot Straight (linked above) for the meme!
Posted by Roberta X at 3:08 PM

Email ThisBlogThis!Share to TwitterShare to FacebookShare to Pinterest
Labels: tactikewt, the wonderfulness of me

The MAD OGRE had a similar meme a while back, except that he wanted everyone to list all of the weapons that were in arms reach of your computer. I sent my list in and got the question back....... Are you paranoid or something?

Question....why the Japanese carpenter's knife AND the Kershaw?

You're teaching Morse to Tam?

Jeez, and I was worried about the Large Hadron Collider ...

AndyJ: I've carried the little Japanese knife in a back pocket for nearly a decade; I'd be lost without it. It's flat and handy, but as it has neither spring nor lock, it's an acquired taste.

The Kershaw holds a nice edge, suitable for skinning wire and cable if I keep it honed, and it's a locking, one-hand-opening, non-switcheblade knife. It's a better backup to the Star.

Turk: it's a generally useful skill. I don't believe she'll take over 30 meters. Still, if it was a choice between her or some digital mode.... [Jack Benney} I'm thinking... [/Jack Benney]

Roberta,
No worries, I also carry two knives at all times. One is an old buck single bladed pocketknife I got free when I worked a magna cigarette promotion 18 years ago. Which is useful for mundane knife chores and well doing anything I might damage a blade doing. T'other is my Gerber Applegate Fairbairn covert folder (or the standard folder when I'm in the mood for something a mite bigger. I haven't yet found a folding knife that suits me better as a defense knife. BTW, I love Kershaw knives, I've got an old Kershaw lockback that was my theatre knife 21 years ago. It stripped miles of wire, cut well, everything that is used to secure things in a theatre and never slipped from my hand when I was on the fly floor or above.


AndyJ,
Someone would have to define "weapons" as EVERYTHING within reach is a weapon, or can be utilised as such. OTOH, I have a fair number of non-improvised weapons within arms reach of the 'puter. Then again it IS in my home office.

Gregg- I listed all handguns, long guns, knives, machetes (fairly large "collection" of these working tools), tomahawks, and night sticks. My collection has diminished in the knife department since I gave most of my collection to my son, but my gun collection has increased considerably since then. Now the original meme was any weapon within arms reach so that does not include all of the weapons scattered throughoout the house. I guess that I am still paranoid.

Does it bother you (too) when you hear Morse in a movie or TV show and it's meaningless? That just bugs me no end.

Ironically, one of my favorite movies, On The Beach, features Morse code as an important plot device, and the denouemont [sp?] is that it is meaningless. They always knew it was gibberish, but they had to investigate it anyway.

The only thing I have in my pocket is my knife, and a Leatherman Wave on my belt. I wear a photographer vest most of the time, and I usually carry more junk in the pockets than most people do in the trunk of their car.

Vast pocketage would be kewl! --Why not go for it?

meaninless Morse is very annoying; worst of all is the randon-element-length jumble. If it's even in close to a 1:3 ratio on dits and dahs, it's less bothersome. Then there's the huge long message that is sent, in clear, with just six letters. Sorry, it doesn't work that way.

Old movies do a better job of this, perhaps because more people knew one or the other telegraph codes.

I've always admired the really skilled operators who copied in their heads and cruised above 50wpm. Knew a couple of guys who were good to past 60wpm. (Hanging out with talent had no effect on me; I peaked at 15wpm.)

The absolute best I ever saw, though, was in an old movie. Either "Dambusters" or "633 Squadron", don't remember which. The squadron was finally sent on their mission and was reporting back to the air field radio room, where the radio operator was translating the beeps and blaps from the speaker for the commanding officer. The code was clear, moderately slow speed and easy to copy. So easy that the operator onscreen was verbalizing the message two words ahead of the Morse.